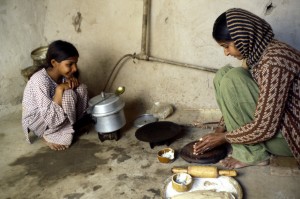 By empowering women, the world would see triple benefits for sustainable development – social, economic and environmental – according to an EU Summit.

The Sustainable Energy For All Summit, hosted by the European Commission, is aimed at addressing the barriers to universal access to energy ahead of the Rio+20 Earth Summit in June.

With one of the key focuses of the afternoon turning on gender equality, Michelle Bachelet, Executive Director UN Women said that focusing on women’s empowerment was “not only the right thing to do but the smart thing to do”.

Many acknowledge the brunt that women bear when it comes to both climate change and the lack of access to energy – for many poor rural women in Guinea, as many as 35 hours a week are spent cooking and washing within the home, an arduous task without the modern appliances the western world take for granted.

Kandeh K. Yumkella, Chair of UN-Energy, and Director-General, United Nations Industrial Development Organisation said: “If you look at an OECD country. Just imagine what the washing machine, the dishwasher etc did for women. It opened them up to go out into the workforce.”

However, less focus is still given to capacity for women to drive change in these areas.

Winnie Byanyima, Director of the UNDP Gender Team said that by empowering women could provide the “triple wins” for sustainable development.

“Sustainable development is not about the environment alone. It requires us to implement the three pillars of development – the social, economic and environmental. In every case women’s equality and access to energy must be fully integrated.”

For example, Bachelet explained to the audience, research into the average energy consumption of single men and women in the western world, showed that on average men use 22% more energy.

While other research has highlighted the willingness of women to change their daily habit in order to save energy and protect the environment, compared to men.

In the developing world, where women are often those who make the decisions within the household, there too is a huge capacity to drive change, by giving women the power to make choices.

And yet, Bachelet said, it does not happen.

While women are the primary users of energy, sources of that energy are still generally produced in a factory by a man – without taking into account the local knowledge and preferences to make them successful.

Women need to have access to education about the energy sector, the summit argued. Currently in science, technology, manufacturing and engineering in the developing world only one in five students are women and only 20% of the workforce is female.

The summit also argued women not only needed access to energy but to the rights to access that energy – through economic empowerment, property rights, and a central role in policy making.

The summit called for more a focus on the issue of gender equality ahead of the Rio+20 Earth Summit in June.

Christian Friis Bach, Danish Minister for Development Cooperation said: “The question is can we see this through a human rights framework and approach? And I really think that should be how we see it.”