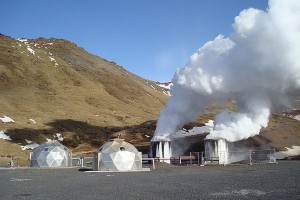 Iceland has been 100% reliant on geothermal electricity since 1970 and could soon be exporting it elsewhere in Europe. (Source: Flickr/ThinkGeoEnergy)

The UK is in negotiations with the Icelandic government to purchase geothermal energy, a British Minister has revealed.

Speaking to The Guardian, Energy Minister Charles Hendry said the two nations are developing plans to connect the Iceland and the UK via a high voltage cable.

“We are in active discussions with the Icelandic government and they are very keen,” said Hendry.

There are a number of plans already underway to connect continental Europe’s grid with the UK and North Africa.

Interconnection allows low-carbon energy such as solar from the Mediterranean and offshore wind from the North Atlantic to be used across Europe, evening out the weather-related intermittencies that some renewable technologies are prone too.

EU countries are committed to sourcing 20% of their energy from renewable sources by 2020.

Iceland, which is positioned over a gap between two of the earth’s plates, has derived all its electricity from geothermal sources since 1970.

The addition of its supplies to the European grid would provide a constant source of power, which Hendry said was more akin to nuclear power than some of the sporadic renewable sources.