The UK is touting the possibility of linking Iceland’s bountiful geothermal energy to the rest of Europe.

It is one of a number of planned projects to tie together the continent’s electricity networks and spreading the benefits of renewable resources.

Ilesh Patel and Vladimir Parail of the Redpoint Energy consultancy explain why EU red tape could still hold back plans for a European supergrid.

A pan-continental supergrid could trigger a new dawn for the European energy market.(Source: Flickr/Theodore Scott)

A co-ordinated and substantial increase in the level of interconnection between national electricity markets can bring a variety of benefits.

It can improve security of energy supply and enable greater penetration of intermittent, weather-dependent renewables, such as wind and solar, by allowing supply shocks to be offset by output in neighbouring interconnected markets.

So for example, if bad weather cuts supply from Germany’s solar panel installations, it can be replaced with excess electricity from UK offshore wind, powered by the same bad weather.

Without more interconnectors, the cost associated with building new flexible capacity to manage intermittency of renewable generation could be significantly greater than would otherwise be required.

By promoting cross-border trade in electricity, it can lower consumers’ bills by increasing use of the cheapest supply sources in the connected markets. This would also enable the least polluting generation sources to be utilised where it is economic to do so.

It can also contribute towards the development of the EU single market and economic integration between, and the optimal use of, resources across EU member states.

The European Commission (EC) has identified a need for $92 billion of investment in an additional 35GW of electricity interconnection capacity plus additional investment in offshore transmission to support renewables.

The capital required to achieve policy objectives may be beyond the finances of many European Transmission System Operators (TSOs), particularly given the forecast economic climate of the next few years.

TSOs are already committed to spending on upgrades to existing infrastructure and to connect new renewable sources.

European Union (EU) regulation on electricity interconnectors allows for merchant interconnectors to be exempt from regulation and be built alongside regulated links. However, the perception, based on recent decisions, is that such exemption is prohibitively difficult to obtain, deterring investment.

However, full market coupling may be incompatible with other policy developments in some EU electricity markets, most notably the introduction of market-wide capacity payments. 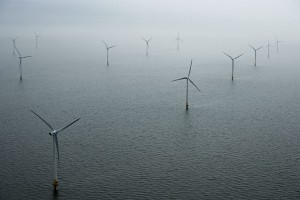 A supergrid would allow offshore wind resources from the UK, Ireland and Norway to be redistributed across Europe. (Source: Vestas)

If non-domestic generators are to be made eligible for capacity payments, firm physical access to interconnection capacity would be a necessary requirement.

Furthermore, the introduction of capacity payments has the potential to significantly distort cross border flows with full market coupling.

Finally, rapid deployment of offshore renewable generation and the need to connect this generation to national transmission grids has raised the possibility of co-ordination between renewable developers and interconnectors, as well as the development of a wider “supergrid”.

Currently, however, the EU regulation is not well suited to such co-ordination. For example, Third Party Access provisions do not favour firm access to interconnection capacity for generation over regular interconnector flows.

Overall, there is no pan-European licensing, regulatory and commercial framework to enable such co-ordination to take place.

In conclusion, rapid developments in EU electricity markets have overtaken the EU target model in several important respects and created an urgent need for regulation to be adapted to those developments in order to enable the full benefits of interconnection to be realised.