EDF: Cut the leaks or gas has no part to play in fighting climate change 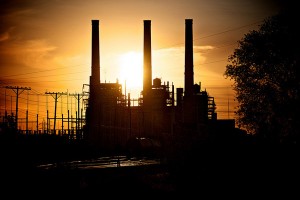 Replacing planned new coal plants with gas can have a positive effect on climate action if leaks remain below 3.2%. (Source: Flickr/ZacharyJensen)

Leaks of methane from the gas supply chain must be limited to 1% in order for it to make a positive contribution to carbon emissions cuts, according to new research co-authored by the Environmental Defence Fund.

A number of governments including the US and the UK, have committed to replace coal with gas for energy production in order to cut their emissions. There are also calls for gas to replace liquid fuels for vehicles.

The direct CO2 emissions from coal are higher than gas by a ratio of roughly 3:2.

However, the additional impact on the atmosphere from leaked methane during the extraction, production and transportation of gas is difficult to determine.

“Failing to reduce methane leaks has the potential to eliminate much, if not all, of the greenhouse gas advantage of natural gas over coal,” said Steven Hamburg, EDF’s chief scientist and co-author of the paper.

One is the magic number

The study published in the Proceedings of the National Academy of Sciences (PNAS) examined a number of factors to consider when calculating this impact and suggested acceptable leakage levels under a number of different scenarios.

“One percent is the magic number,” said Hamburg. “If we want natural gas to be an accepted part of a strategy for achieving energy independence and moving to a clean energy future, it’s critical that industry, regulators and other stakeholders work together to quantify the existing methane leakage rate and commit to reducing it to one percent or below if, as expected, the leakage is currently higher than that.”

The US Environmental Protection Agency (EPA) currently uses a rate of 2.4% from the gas well to a city.

The study found that if accurate, with this level new gas plants are more beneficial to the environment than new coal plants. Leaks must remain below 3.2% for this to remain true.

However, for transportation, cuts as high as two thirds of current leakage rates must be made for a switch to gas to have a net beneficial impact.

Methane has 21 times stronger warming effect than CO2 during a 100 year time period. As a result leaks of methane can offset the benefits of burning cleaner fuel.

Recently discovered shale gas deposits in a number of countries including Poland, US, China and the UK have led to calls for a “dash to gas”.

A lack of data over leakage rates in the extraction of shale gas, which is obtained by fracturing the rock it is held in, makes it difficult at present to pass judgement on the fuel’s carbon footprint.

Separate concerns over the “fracking” process triggering earthquakes and polluting local water supplies have stalled its development in many countries.