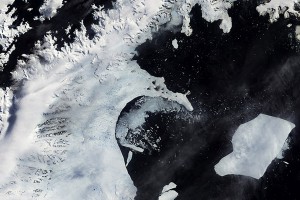 The Larsen Ice Shelf as pictured by NASA in 2002. (Source: NASA Goddard)

Just 15% of the Larsen B Ice Shelf in Antarctica remains compared to 1995, according to the latest data from the European Space Agency’s Envisat satellite.

The device has been monitoring the break-up of the Larsen ice shelf since its launch.

“Ice shelves are sensitive to atmospheric warming and to changes in ocean currents and temperatures,” said Prof. Helmut Rott from the University of Innsbruck.

Melting ice affects the climate system in a number of ways.

It raises sea level and the influx of freshwater into the oceans can also affect ocean currents that transport heat around the globe. This process is partially driven by salinity.

The loss of ice cover also reduces the amount of energy from the sun reflected back into space. Vegetation and rock reflect a much smaller proportion by comparison.

“The northern Antarctic Peninsula has been subject to atmospheric warming of about 2.5°C over the last 50 years – a much stronger warming trend than on global average, causing retreat and disintegration of ice shelves.”

Larsen A disintegrated in 1995 and Larsen B appears to be on borrowed time. The largest of the three, Larsen C is thought to currently be stable.

Satellite observations can be used to monitor the effects of present-day warming on ice cover to improve computer simulations of future climate scenarios.