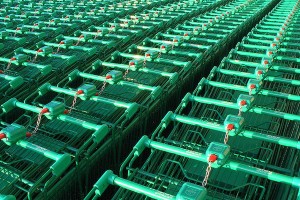 Consumer power enabled by social media tools has contributed to the rise of the sustainability agenda, according to a UK retail group.

“The speed that things are scaling up in the sustainability market is probably the most notable difference. Sales of sustainable fish have gone from nothing to hundreds of millions of pounds in just a few years. That took Fair-trade a long time to achieve, decades perhaps,” Clavin told RTCC.

Ethical and sustainable consumerism involves shifts across a range of products and services, many of which have beneficial environmental impacts along the way.

Social media is playing its part in the sector’s expansion allowing campaigns for change to gather momentum quickly and drawing attention to those companies that lag behind.

“It’s proving to be quite impactful, you can quickly mobilise people around a certain issue through social media, which once upon a time would have taken weeks and weeks of preparation from a communications team,” said Clavin.

“Now businesses have to be responsive in a way that they previously did not. The old days of responding to a difficult issue with a press release then taking the phone of the hook are gone. You can’t just go quiet, you have to be honest and accountable,” he added.

A recent report by Deloitte stated that sustainability was increasingly becoming part of consumer’s expectations, forcing businesses to adjust.

According to Deloitte, these trends will continue to influence products, supply chains, resource use and waste management.

“It’s not the consumer’s responsibility to weigh up the carbon footprint of every product in their basket or to check the small print on two packets of biscuits to figure out which used sustainable palm oil,” said Clavin. “That’s why we look to take these decisions away from the consumer by offering sustainability as standard.”

The Co-operative runs UK supermarkets, petrol stations, a bank and a number of other businesses and is owned by its 106,000 employees.