Earlier this year RTCC met Mark Kragh as he was about to head out to Kenya to complete a very ambitious task, building 100 solar powered phone chargers, aimed at giving one village the power not only to use mobile phones, but to develop the local economy.

We caught up with Kragh back in the UK to find out how the trip went and what’s next for his ambitious project.

When Kragh first arrived there were many more people in the class than he had orginally planned for (© Marina Kloess Photogaphy/www.marinakloess.com)

Armed with their tools, their expertise and a camera to document the trip, Mark Kragh and his team headed out to Soy, Kenya not only to provide a village with solar energy but with the beginnings of a thriving business.

The aim of the project, in partnership with charity organisation World in Need, was to build 100 small solar units made primarily from broken photovoltaic (PV) cells and components he could find locally.

Back in his North-London office, Kragh from solar suppliers KnowYourPlanet takes me through his team’s two weeks in Kenya.

While not hitting their original target of building 100 solar powered chargers during their time out there, Kragh believes they left behind something much more valuable.

“I changed the strategy quite soon into it,” he explains. “I could have taken a factory approach and thought lets just build this many and not teach anything and I probably could have built a lot with the group because they were really skilled but I wanted to just focus on building a few.”

VIDEO: Mark Kragh and the KnowYourPlanet team documented their trip to Soy, Kenya, and what they learnt.

“By the time I get back they should have generated revenue.”

While bringing the solar panels into the town, the heart of the project was always about providing the five students in the class with the basis for a social enterprise which could sustain itself once the team had left.

If not they could easily have used the money available to them to build one large installtion for a community building – the type of project the money was orginally put forward to build.

Kragh says that while this would look fancy, if  it had broken it would no longer be of any use to the community without the expertise to fix it.

The design Kragh’s team used were much lower tech, making them easier to build without huge amounts of training and also easily scalable.

“This is just one business. Now we need to build a school to support that business and then once that school is built we will probably make another ten businesses and then we will build another ten schools,” Kragh explains. 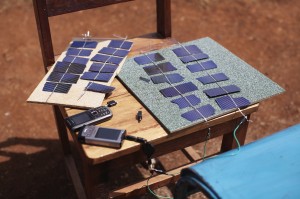 The basic idea of the panels was very simple, and while it may not have looked attractive it worked well (© Marina Kloess Photography)

“I suppose if it functions the way it should it will be like ripples in the pond. It will keep expanding.”

In essence the panels are just a series of small PV cells soldered together, and connected to a USB stick, ready for a phone.

With mobile phone ownership in Africa soaring, from 16 million in 1999 to around 376 million today and continuing to rise, Kragh explains how insane he finds it that people still have to travel several kilometres to charge their phone, using a diesel charger producing far more energy than the phone actually needs.

The sun provides the perfect alternative source of energy for Kenya’s phones. A 2007 World Bank report stated the country’s solar resources are equivalent to 70 million tons of oil.

Kragh’s project is one which can easily be exported to other towns in the country and then throughout the continent too.

Kragh explains how impressed he was by both the skill and the dedication of the students he was teaching. 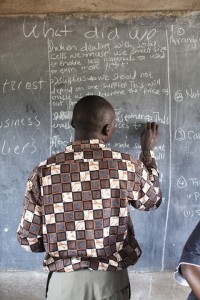 “I did a spot test and I said I want each one of you to write five unique things that you have learnt here…I tell you this white board was just full of genius, it was fantastic, nothing was missing,” he explains.

While a success for the team, the first trip to Kenya was somewhat of a learning curve, and not everything went to plan. Having six days teaching with the students, Kragh feels they would have benefitted much more from a full two weeks of training.

“We could have needed a lot more time. We should have at least 14 days, but we will arrange it a little bit more clever next time.”

And other changes, implemented during their stay, would be considered from the start next time. For example Kragh explains how he ended up doing just three hours of business training, so the students could take their skills and really run with them once the team left – something he would spend more time on next time.

“One of the problems as well was we didn’t actually have the space for the shop to go into straight away, which is a bit unfortunate. So right now they are waiting for the shop to become avaliable. 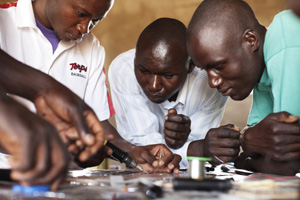 “These are small minor adjustments not major project killers.”

With plans to head back out to Kenya in a few months time, Kragh is already thinking forward. As well as helping the group to implement their business in the region, and to expand the project further with schools, Kragh aims to create a lasting partnership with the region.

“There is no denying that part of this project will have to be a continuous supply of some of the wires and chemical and solar cells. It is really specialised stuff,” Kragh said.

“So part of what we are going to do, is to set up a distribution network so that they will have these things available because they just aren’t right now. They don’t exist in these countries, and there is no reason why they shouldn’t.”