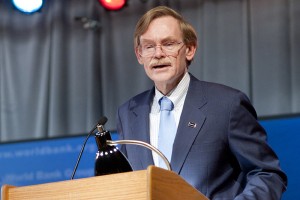 The BRICS group of emerging economies is planning a new development bank to redress the balance in large-scale international financing as it pursues a more “just” system.

At the group’s most recent meeting this week, leaders from Brazil, Russia, India, China and South Africa agreed to begin consultations on an alternative to existing institutions such as the Asian Development Bank and the World Bank.

The latter has signalled its tentative approval for the scheme.

“India was one of the sponsors of this [BRICS bank] idea. And partly because they wanted more funds for infrastructure development…if they do develop an institution, the Bank will want to be partner with it”, said Robert B. Zoellick, World Bank President, at the end of the meeting.

The World Bank chief is traditionally selected by the US President and is based in Washington.

The BRICS statement published following this week’s meeting called for a “merit-based” system of election instead to water down Western influence.

“We therefore call for a more representative international financial architecture, with an increase in the voice and representation of developing countries…that can serve the interests of all countries and support the development of emerging and developing economies,” read the BRICS statement released after the meeting.

There was opposition at the UN climate talks in Durban last year to suggestions that the new $100bn Green Climate Fund (GCF) also be based in Washington.

Developing countries called on the GCF to be based in a “more global environment”.

No decision has been made.