Ban Ki-moon calls for closer links between policy and science 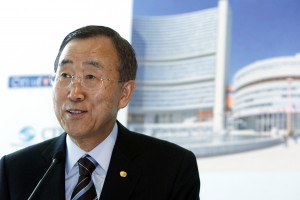 The UN Secretary General has called for closer cooperation between scientists and policy kers ahead of Rio+20.

Speaking via a video message at the Planet Under Pressure conference in London, Ban Ki-Moon spoke of the role science has in discovering solutions to  climate change and global sustainability.

“Climate change, the financial crisis and food, water and energy insecurity threaten human well-being and civilization as we know it,” he said.

“The scientific community can help us make sense of these complex and interconnected challenges, including by strengthening our understanding of “planetary boundaries” and “critical thresholds”.

“The Intergovernmental Panel on Climate Change (IPCC) is just one example of what we can do together.”

However, he warned of a pattern that has emerged where policy makers do not turn to scientists for advice, and where the scientists work in ‘silos’ ignoring wider factors in their work.

IPCC chief Dr Rajendra Pachauri told RTCC at the COP17 climate summit in Durban that scientists were being excluded from the negotiations. Despite many hailing the ‘Durban Platform’ as a political triumph, scientists say the world is still on course to hit 4°C.

“The problem is that the majority of colleagues don’t really understand the science, to be blunt” he said.

“As a consequence, particularly at times of economic recession and difficulties throughout the globe, it’s rather difficult to sell policies which actually add costs to business and consumers.”

Ban Ki-moon says he is ready to develop stronger links with the scientific community. The UN’s High-Level Panel on Global Sustainability has recommended the establishment of a chief scientific adviser or scientific board to advise the UN.

“As I take this recommendation forward – with support from Director-General Bokova – I also intend to engage the scientific community on other projects, such as the Global Sustainable Development Outlook report,” he said.

“I look forward to working with the scientific community towards a more coherent, science-based and effective approach to today’s global challenges.”

The Planet Under Pressure Conference, a four day meeting of leading scientists, policy makers and civil society members form across the world, aims to focus the scientific agenda ahead of the Rio+20 conference in June.

The group has produced a State of the Planet Declaration, setting out its key aims moving ahead towards the Earth Summit, calling for a more joined up approach between science and policy.