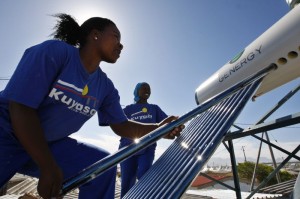 South Africa has built roughly 2.4m low-income homes in the past 15 years, and aims to build a further 3m over the next 15.

Many of these are based in townships, in and around the country’s major cities, such as those in the Kuyasa settlement in the Khayelitsha Township 30km outside Cape Town.

The Kuyasa project, the first of South Africa’s internationally registered CDM projects, aims to help those living in these poor areas manage their energy bills, while also bringing local trade to the region.

It also aims to train people, use local labour and leave people with the skills to continue working in the Township or in Cape Town.

In the forth of a series of UNFCCC CDM Radio Club reports RTCC is hosting, the UNFCCC’s Irini Roumboglou looks at the benefits of the project and asks if they could be replicated elsewhere in South Africa.