West Antarctic ice shelves are being torn apart as they lose their grip and fall away from the rock and ice sheets into the sea, according to a new study.

And the extent that this is occuring could amplify the already accelerating loss of ice in the region, warn glaciologists from the University of Texas at Austin’s Institute for Geophysics.

The study, published in the Journal of Glaciology, examined 40 years of satellite data of the ice shelves in the critical eastern Amundsen Sea Embayment in West Antarctica.

It found that warming temperatures and melting ice accumlations on the floating ice shelves are causing them to lose their grip,  eventually calving – breaking off – and floating out into open sea.

While this break up of the ice shelves occurs naturally, partiuclarly in the summer months, the researchers say that the extent to which ice shelves are being lost will make it much more difficult for grounded ice – that rested on the ground rather than the sea – to be held back.

It is the loss of grounded ice that most worries scientists – as this directly contributes to sea level rises. 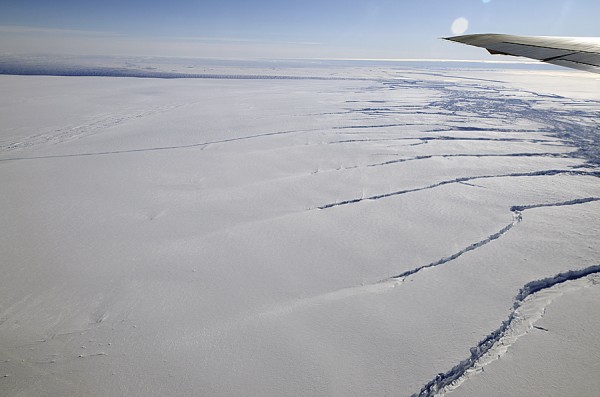 The rift found along the Pine Island Glacier last year was around 20 miles long and growing by around 2 metres a day(© Michael Studinger, NASA's Operation IceBridge)

Last November, NASA Scientists warned of one particular rift found along the Pine Island Glacier in Antractica, where they found a 20 mile long crack in the ice.

They predicted the iceberg – an area the size of Berlin – would calve from the glacier towards the end of 2011 or early 2012.

While the iceberg being tracked by NASA is a natural occurance, the latest study found some longer term negative trends of the ice extent in the region.

“Typically, the leading edge of an ice shelf moves forward steadily over time, retreating episodically when an iceberg calves off, but that is not what happened along the shear margins,” says Joseph MacGregor, lead author of the study. 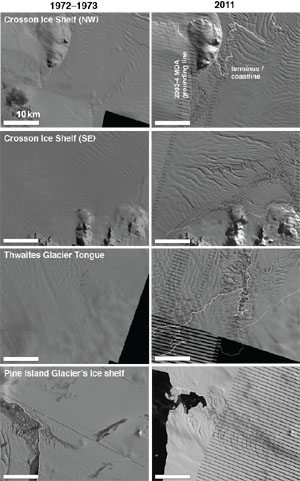 Pairs of Landsat satellite images showing changes in ice shelf margins in the eastern Amundsen Sea Embayment in West Antarctica between 1972 and 2011.

“Anyone can examine this region in Google Earth and see a snapshot of the same satellite data we used, but only through examination of the whole satellite record is it possible to distinguish long-term change from cyclical calving,” adds MacGregor.

The study found that the shear margins that bound these ice shelves are now heavily rifted – resembling a cracked mirror.

Eventually large areas of ice will clave from the shelves and the detached icebergs would drift out into open sea, causing an unstable front to the ice sheet.

As the glacier flow continues, pushed by gravity, towards the direction of the broken ice-sheet the glacier front can calve rapidly.

While the this pattern is created by glacier melt – which helps to losen the ice shelves grip – the researchers also warn of the resulting increase of the loss of ice to the sea.

“As a glacier goes afloat, becoming an ice shelf, its flow is resisted partly by the margins which are the bay walls or the seams where two glaciers merge,” says Ginny Catania, co-author of the report. “An accelerating glacier can tear away from its margins, creating rifts that negate the margins’ resistance to ice flow and causing additional acceleration.”

The team found that the largest relative glacier accelerations occurred within and upstream of the increasingly rifted margins.

The study is the most extensive record yet of the evolution of floating ice shelves in the Amundsen Sea Embayment.

It found substantial changes between the beginning of the Landsat satellite record in 1972 and late 2011, particularly in the last decade.

The affected ice shelves include the floating extensions of the rapidly thinning Thwaites and Pine Island Glaciers.

VIDEO: Produced by Joseph MacGregor and Ginny Catania, (Institute for Geophysics / University of Texas at Austin), this video shows a series of satellite images mapping the rifts along the Pine Island Glacier…