Nearly 700 Kenyan farmers have taken part in a trial to integrate advanced weather forecasts from climate scientists into their traditional farming methods.

Climate change is expected to make it harder than ever for farmers to know what each growing season will bring, by making the weather more erratic and extreme.

Participating farmers have been coping with weather patterns consistent with the expected effects of climate change such as higher temperatures, more intense rainfall, stronger winds and longer dry periods.

The idea behind the Sustainable Agricultural Livelihoods Innovation Project in eastern Kenya, funded by Christian Aid and the Humanitarian Futures Project at King’s College, London, is that combining science-based seasonal forecasts with more traditional methods will be more successful than either approach alone.

The trial could benefit up to 12,000 Kenyan farmers (Photos: Christian Aid)

‘Combining traditional knowledge with science-based forecasts will help farmers make better decisions about which crops to plant where, as well as when to plant and harvest them,’ said Richard Ewbank, Climate Adviser at Christian Aid.

‘Those decisions change people’s lives – getting them right leads to good harvests and families having plenty to eat and sell. Getting them wrong can lead to hunger, poverty and suffering. This is the reality for millions of people across Africa.’

Participating farmers have been coping with weather patterns consistent with the expected effects of climate change such as higher temperatures, more intense rainfall, stronger winds and longer dry periods.

Twelve groups (averaging 55 farmers each) were given scientists’ predictions of when last year’s short rains would start, how they would be distributed across the area concerned and when they would finish. Local, traditional indicators such as the timing of the flowering of acacia trees were also factored in.

Training was given in how to interpret the data from the Kenya Meteorological Department, and recommendations made about how best to grow main crops such as maize, cow peas, green grams, beans and sorghum. 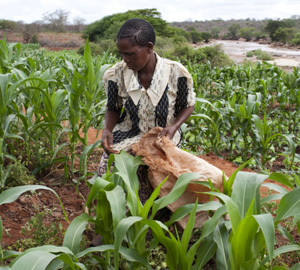 The trial will continue throughout 2012 and 2013 (Photo: Christian Aid)

Although some farmers already receive seasonal forecasts via radio and occasionally TV, many place little reliance on the information as the nearest weather monitoring station is some distance away in an area with very different rainfall patterns.

This highlights another difficulty facing African farmers – the continent has only one eighth of the minimum number of weather monitoring stations recommended by the World Meteorological Association.

The forecast for the area using the project’s methods was that it was ‘likely to receive near-normal rainfall with a tendency to above-normal’ and this is what actually happened, along with flash-floods in some areas towards the end of the rainy season.

Research with the farmers’ groups suggested that as a result of the extra information they received, they planted early to take advantage of the predicted early start to the rainy season, planted crops which could tolerate any possible early end to the rains and worked with the soil to ensure that whatever rains did fall penetrated the ground rather than running off it and causing soil erosion.

The project will continue through 2012 and 2013, including a further 24 farmers’ groups to bring the total number of people (including the farmers’ families) benefiting to some 12,000. New ways to tell farmers about scientists’ seasonal forecasts will also be investigated, including via mobile phones.

Early results from the project will be presented by Richard Ewbank at the Planet Under Pressure conference in London’s International Convention Centre later today (Tuesday, 27th March).