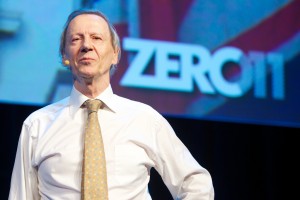 One of the UK’s leading climate change commentators has likened the state of the international climate change negotiations to a science fiction film.

Speaking at the “Planet under Pressure 2012” conference, Professor Anthony Giddens, from the London School of Economics told an audience that global talks were as linked to reality as The Matrix.

The 1999 film follows a computer hacker played by Keanu Reeves, who discovers he lives in a virtual reality world – far apart from the dystopian wasteland that an enslaved human race now inhabits.

“When you look at the negotiations as they unfold, they to some large part operate in this simulated world, where their success if based on the ability to keep the talks going,” he said

“If you look at Durban, it was seen as a success, but in reality what did they do? Little will be done before 2020.”

In the Matrix, two worlds exist in parallel. The computer world where life is deceptively easy and the real world where humanity is in a terrible mess.

“I don’t think one should try to normalise climate change. It is something no other population has experienced – at least not human induced climate change,” he added.

“It is very different from other major problems. For example take global poverty. If that was the same in 2050 as it is now that would still be a very bad thing. But with climate change, with emissions going up into the atmosphere all the time we have no way – without a major technological breakthrough – of getting those emissions back out of the atmosphere.”

Too late to act?

Giddens warned that the world was creating risks of which it has no previous experience and no historical lessons to learn from.

He also warned that with so many uncertainties when it comes to potential changes from climate change the world will not know what it faces until it is too late.

While acknowledging the substantial change which is taking place and will continue to take place at a local level – with such movements as the Transition Towns – Giddens believes the real question moving forward will be integrating these changes globally.

He said states, groups of states and regional agreements will have a greater role, as the UN appears to be loosing force, and hopes that the largest developing nations – particularly China and Brazil – will lead the global community in this.

He added that the world needed to find a radical new way of thinking of things – what he termed “Utopian Realism” – a utopian idea of the future that faces the very real pressing and urgent issue of climate change.

“It is no good supposing growth can only be brought about by having the iPad 4, the iPad 5, the iPad 6. We know we need to different kind of development.”

“India and China can not continue with their current process of industrial development, mimicking the West. It is not sustainable and it is up to us to develop the new model.”

While talk about renewables is important, said Giddens, this alone will not stop the growing trends in carbon emissions which made 2010 the highest year on record.

According to the latest IEA report, discounting hydro power and nuclear, only 1% of the world’s energy is currently produced by renewable energies.

To end his speech, Giddens borrowed the words of the Suffragette movement. Where their slogan was “deeds not words” Giddens said we must now be asking for “deeds not only words.”