The Island President: How Maldives President Nasheed fought for his country’s survival

The premiere of ‘The Island President’, a documentary based on former Maldives President Nasheed, opened this year’s 2012 Human Rights Watch Film Festival.

RTCC reporter Tierney Smith attended the event at Soho’s Curzon Cinema. This is her take on the film.

Could there have chosen a better time to release this film?

Barely a month ago President Nasheed resigned from his position, under pressure from a combination of political opponents, the military and sections of civil society.

The Island President is a stunning portrayal of a man who, after an fierce struggle to power, faced an even tougher fight: the fight for his country’s survival.

Jon Shenk followed Mohamed Nasheed through his first year in office, which culminated in the 2009 Copenhagen Climate Conference, and finds a great balance between humour and solemnity.

The first half an hour of the film sets the scene, giving you a history of the politics in the Maldives. Nasheed’s rise to power followed years of fighting for Democracy, 12 imprisonments and periods in solitary confinement.

Footage from the time of the unrest – which took force in 2003 following the death of a prisoner at Maafushi Prison – is woven into interviews with Nasheed and those closest to him, from his political and personal life.

These aspects provide a stark contrast to the high-class resorts and stunning beach shots western viewers might associate with the Maldives.

But once Nasheed won the Presidential elections, the sheer volume of the climate challenge ahead of the new government became apparent.

Beautiful aerial shots of the 1000+ islands which make up the Maldives, stunning beach images and pictures from the bustling island of Malé – the country’s capital – are in dire contrast with previously unseen scenes of destruction on the islands.

Coastal erosion in the Maldives has left exposed rocks and fallen trees, while some of the country’s stunning coral reefs are now brown and bare from the effects of warming water.

The sight of huge diggers rebuilding sandbanks provides an insight into the struggles the country faces.

And at the heart of the film is the man himself. Charismatic, approachable and always smiling, Nasheed made a splash on the global stage in his first year in power.

Refreshingly candid and relaxed in front of  camera – Nasheed takes you into the complex world of political negotiations – attempting to gain diplomatic leverage by partnering with other island and developing nations.

And he led from the front, with pledges for the Maldives to go carbon neutral, and passionate speeches in the final hours of Copenhagen.

This meant Nasheed gained a powerful following of both international heads of State and the international media in his first year in power, and went on to become a leading figure in the climate debate in the years that followed. 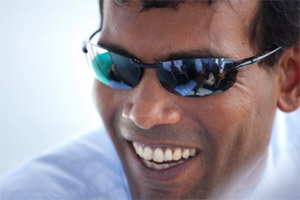 With stunts that included an underwater Cabinet Meeting, the film captured Nasheed’s light-hearted approach and quick wit when dealing with difficult situations.

This contrasts starkly with the raw and passionate way he speaks of his country’s fate. Never watering down his words and sentiments on this issue, he offers a stark contrast to the normal language used in the negotiations.

At many points during the film he questions the point of the Democracy he has fought for when the country is disappearing, talks of an entire nation being wiped out and – going against the advice of his staff – compared the situation facing the Maldives to the NAZI invasion of Poland in 1939.

Beautifully shot, and set almost exclusively to a Radiohead soundtrack, the film offers a rare glimpse in to the political world of the climate negotiations through the eyes of one of the country’s most at risk.

And its message is clear: If nothing is done, rising sea-levels will cause the Maldives to lose everything, including a nation’s identity.

It opens for theatrical release in the UK on 30th March. For showings near you visit the Dogwoof website.