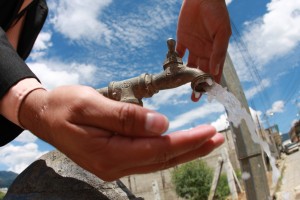 The report warns that if enough is not done to conserve water, the main burden will be placed on poorest countries (© Johannes Roesler/IUCNWeb/Creative Commons)

Climate change will exacerbate current and future stresses on water resources from population growth and land use, according to the fourth UN World Water Development Report.

Released at the World Water Forum – a six day gathering on world water issues – the report highlighted some of the daunting challenges ahead.

The UN estimates that between $70 to $100 billion could be needed to deal with the effects of a 2°C warmer world.

Much of this would be used to tackle problems of water supply and flood management.

The report also warned as much as 90% of natural hazards are water related – particularly flooding and drought – and the frequency and intensity of such events are increasing.

As well as climate change, the report highlighted the growing pressures to provide clean water and sanitation to the poor and to feed a growing population – set to hit nine billion by 2050.

“Pressures on freshwater are rising,” UN Secretary General Ban Ki-moon writes in the report. “From the expanding needs of agriculture, food, production and energy consumption to pollution and the weakness of water management.

“Climate change is a real and growing threat. Without good planning and adaptation, hundreds of millions of people are at risk of hunger disease, energy shortages and poverty.”

The report is produced by experts in hydrology, economics and social issues under guidance from UNESCO. It aims to be the world’s reference manual for water.

As well as pressures from climate change, the report highlighted several other pressures on water resources:

– Increasing populations, a higher demand for food and growing meat intensive diet will drive up the demand for food by 70% by 2050. The report warns this would mean an increase in agricultural water consumption by nearly 20% unless efficiency measures improve.

– Energy and electricity generation needs water.  With global energy consumption set to rise 50% by 2035 more water will be required.

– With the urban population set to grow from 2.4 billion in 2009 to 6.3 billion in 2050 the report warns that the numbers of people who lack a decent water supply and sanitation could have grown 20% since the Millennium.

This follows a UN report last week which said the goal for clean drinking water had already been reached. But while the report acknowldges the world is on track when it comes to drinking water, it highlights that access to sanitation is unlikely is hit its MDG target.

– Extraction of groundwater is set to be a big issue in the future. With much of the water supplies being non renewable – and supplying nearly half of the population’s drinking water – the report warns many supplies have already reached critical limits.

– Retreating glaciers will also be a problem, as they currently provide much of the additional water stream flow above annual precipitation.

– ‘Availability’ of water is also dependant on the quality of water. A much as 80% of waste water is not collected or treated, according to the report. In countries in the Middle East and North Africa the economic costs of poor quality water could be as much as 0.5% to 2.5% of GDP.

The report highlighted the need to not only look at the supply orientated solutions, but also at demand – one vital element of which would be integrating the individual challenges of water food and energy.

It called for overhaul in water management and a massive effort to curb waste. Better irrigation systems, less thirsty crops and the use of “grey” – or used – water to flush toilets are among the options.

If measures are not put in place it warns, the main burden would fall on the world’s poorest – further exacerbating disparities between regions, sectors and countries.