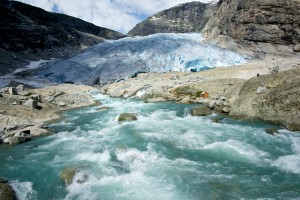 Climate change and glacier retreat could impact biodiversity of river systems, according to new research.

The study, published in Nature Climate Change examined the biodiversity loss of glacier-fed river systems across the Ecuador Andes, the Swiss and Italian Alps and the Coastal Range Mountains in southeast Alaska.

The researchers found evidence in all regions that several aquatic macroinvertebrates – those large enough to be seen without a microscope – began to disappear in regions where a high disappearance of glacial coverage in the river’s catchment was witnessed.

Between 8 to 14 species could be lost completely with the complete disappearance of glaciers in the region, according to the scientists.

As many of the glacier-fed river systems represent isolated islands of biodiversity, the researchers warned that not only local and regional extinctions are possible, but also the extinction of endemic species.

The study warned that extinction would be undesirable as the macroinvertebrates play a key role in ecosystem functioning – for example organic matter decomposition.

It also warned that the role of these species in the food chain in such ecosystem was still unknown and the impact their disappearance could have on fish, amphibians, birds and mammals still unpredictable.