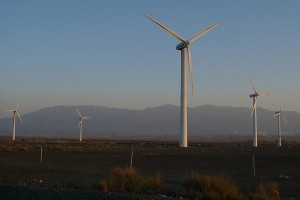 A huge Chinese wind farm near the Mongolian border. There is more than 10GW of installed wind power in Inner Mongolia. (Source: jlau)

Desert solar energy could be powering homes in Russia, Japan, and China under plans by Desertec and backed by the Japanese Renewable Energy Foundation (JREF).

The two organisations have partnered to promote the creation of a new electricity grid to connect solar power from deserts in Mongolia and China, to cities across East Asia, including fast-growing markets like Vietnam.

The Gobi Desert is estimated to be the third largest potential source of solar energy in the world and also experiences steady, strong wind speeds making it ideal for both technologies. It is however, hugely isolated.

“Establishing an Asian Super Grid will be challenging and require a high-level of international collaboration but its benefits make it worth the effort,” said Kåberger.

The grid would use special transmission lines that lose low levels of power allowing electricity to be distributed over thousands of kilometres.

JREF was formed in the wake of the Fukushima nuclear accident to promote the development of renewable energy in the country.