The anatomy of US energy subsidies 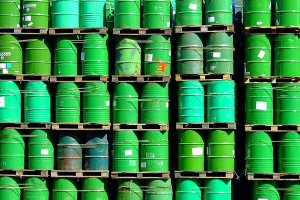 Renewable energy received the majority of US energy subsidies according to new, independent figures published this week, but look beyond the report’s headline, and a different story emerges.

Fossil fuel subsidies are engrained in energy policies around the world, but with most governments feeling the pinch financially, there’s more scrutiny on how taxpayer’s money is spent than ever before.

Rising energy bills at home and at the pump, have also become a massive political issue, nowhere more so than in the US.

Subsidies have become increasingly contentious with President Obama recently calling for “an end to the taxpayer giveaway”. The opposition argue that it is costly renewables, not the fossil fuel industry that is uneconomical.

The Congressional Budget Office (CBO) listed $24bn in subsidies. This was made up of $3.5bn in Department of Energy spending, half of which went on renewables, and $20.5bn on “tax preferences” or tax credits.

Looking at these figures gives a very different story than the headline attached to the report.

Of that $20.5bn, it lists just $2.5bn as designated for fossil fuels, compared to $12.9bn for a variety of renewable energy initiatives. This includes payments to small and medium sized businesses for generating their own power, to tax credits for investment in larger renewable infrastructure.

It also includes a $6.9bn contribution towards biofuels and biodiesel. Given that most biofuel use is as part of a blend with traditional fuels, the majority of recipients of this subsidy are the major oil refiners.

The US produced 13.2 bn gallons of ethanol based fuels in 2010. Together with Brazil, they are responsible for 88% of the world’s supply.

This means that half of the large chunk designated for renewables in the CBO’s pie chart, is for companies producing and selling fossil fuels.

Under the ethanol tax system (which expired at the end of 2011), oil companies are taxed at the usual rate of $0.184 per gallon. However, for each gallon of ethanol they blend with their fuels, they receive a $0.45 tax rebate. 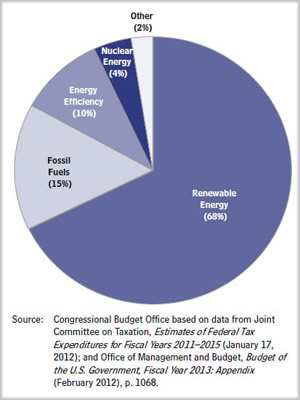 According to the US Energy Information Association, the four largest US ethanol blenders are Valero Energy, ConocoPhillips, ExxonMobil and BP.

A new tax credit based on investment in biofuel infrastructure has been touted as a replacement of the previous system.

A number of figures including EU Climate chief Connie Hedegaard and IEA’s chief economist Fatih Birol have joined the chorus for an end to fossil fuel subsidies.

Hedegaard has said the Rio+20 Summit would be the perfect opportunity to slash fossil fuel subsidies.

It is the UN’s Year of Sustainable Energy for All. For the hundreds of millions of people living off an electricity power grid, their options are few. Renewable energy is too expensive to buy outright. This creates opportunities for innovative new players such as Eight19’s pay as you go solar, or kerosene.

Speaking to the Guardian, the IEA’s Birol said: “Energy is significantly underpriced in many parts of the world, leading to wasteful consumption, price volatility and fuel smuggling. It’s also undermining the competitiveness of renewables.”

The removal of subsidies on fossil fuels in Nigeria sparked riots, forcing the President to over turn the decision after just 16 days.

If there is to be an answer in Rio, it cannot be universal.

Fossil fuel cuts in the US may stimulate new technology but in the developing world they could be catastrophic.

Perhaps when the UN conventions meet in June they need look no further than there own concept of “common but differentiated” subsidy cuts.