Figueres: Sceptical minority will not hold back climate action 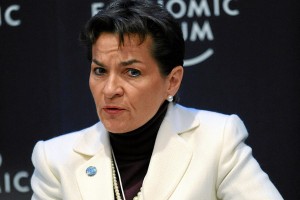 A small but vocal group of sceptics will not be bale to disrupt international talks on emissions reduction, the UN climate change chief said today.

Christiana Figueres said she was pleased with the outcome of talks in Durban, but sceptics could not interfere with so much still to be done.

“There are voices that continue to deny climate, these are well organised and well funded voices but its clearly not the majority,” said Figueres. “They just so happen to be well organised and have such good access to the “megaphones” that they make it seem like they aren’t a minority.”

Using her own experiences Figueres said that observed changes in Costa Rica of precipitation and desertification were sufficient to make her mind up.

“If we can all see the evidence, then we know where those voices that speak against climate change are coming from. But believe me, they are not holding us back. We are moving forward.”

Figueres also said business and civil society had a huge role to play in order to combat an increasingly urgent crisis.

“Exporting all the responsibility to governments would leave us on shaky moral ground. Everyone must do take their share,” she added.

“There is no doubt in my mind that Durban delivered beyond expectations, I’m the first to acknowledge frustration with the pace of the talks. This job has taught me that patience is vital but that’s in stark contrast to the urgency of the problem” said Figueres.

She also confirmed that there would be no climate talks as part of the Rio+20 summit in June.

Negotiations between all nations will resume in November in Doha.

The length of the second Kyoto commitment period and the source of long-term finance would be high on the agenda.