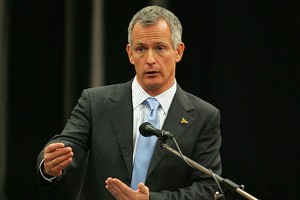 As part of RTCC’s London Week, the leading candidates in the city’s Mayoral election have explained to us how they would cut emissions and make London a greener place to live.

So far we have heard from the Green Party’s Jenny Jones, Labour candidate Ken Livingstone and the current Mayor of London, the Conservative’s Boris Johnson.

London needs to starts adapting rapidly to the current environmental challenges facing the world. The scale of the problem means we must take real action now.

London’s air quality is poor, contributing to more than 20,000 deaths a year, and the Mayor has failed to grasp hold of the problem. The City faces a huge EU fine for exceeding legal limits of air pollution, and Johnson’s only reaction has been to spray the roads in some of the worst polluting areas with a liquid that traps dust particles. It’s a temporary measure that won’t solve the issue. We need to get serious and reduce these dangerous levels of pollution

The London Liberal Democrats are committed to improving clean air standards through a new Clean Air Zone for central London. To tackle this issue we will deliver a big switch to pollution-free electric vehicles, with all buses, taxis and most commercial vans going electric by 2020 and promote a healthy increase in walking and cycling. It’s astonishing that nearly two-and-a-half years after first promising action to clean up London’s taxi fleet the Mayor has failed on two of this key promises

Whilst borough’s around the country continue to improve on recycling rates, London is falling behind. The City creates 20 million tonnes of waste a year in total but households only recycle 32% of their waste, compared with 40% in the rest of the country.

We need to set a long term goal for London to become zero-waste, reducing the amount generated and increasing both resource reuse and recycling. Setting tough targets for boroughs and disposal authorities will help kick-start a recycling revolution that should include food waste collections.

When it comes to London’s water supply, over a quarter of it (nearly 600 million litres a day) is lost in leakage between treatment plant and tap – equivalent consumption to an extra person living in every home. This needs to be tackled immediately to ensure water is not needlessly wasted and improve the efficiency of water treatment plants in London.

Poor insulation means London’s homes account for more than a third of CO2 emissions and one in five households suffers from fuel poverty. Improving housing is one of the best ways to reduce fuel poverty.

Poor housing has a big impact on health, so I want to be ambitious and make large developments achieve at least code Level 5 for Sustainable Homes and require good liveable space standards, and set a target for C02 reduction in the existing housing stock.

I also want to speed up action to roll out loft and cavity wall insulation, aiming for a ‘zero carbon’ London by 2030.

Moving to the ‘green economy’ will bring big benefits to the whole of London – some estimates say as many as 225,000 new jobs can be created. A Green Investment Bank will be key to channelling additional flows of private investment into the low-carbon electricity infrastructure investment we need over the next decade.

London Liberal Democrats are passionate about tackling climate change and are committed to the vision of making London a carbon neutral city for the benefit of all Londoners. If we successfully tackle these issues now we can transform the health and prosperity of our capital and ensure a greener, healthier future for London.