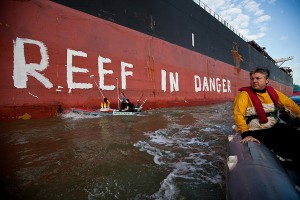 Greenpeace activists get their message across in Gladstone Harbour. (©Greenpeace Australia Pacific)

The inspection follows the approval of several fossil-fuel processing and transport facilities within the boundaries of the marine park.

Greenpeace activists painted “reef in danger” on the side of a coal transport ship in Gladstone harbour, during a UNESCO site visit.

“We need a constant reminder that the reef is in so much danger from the massive, out of control coal boom,” Greenpeace climate and energy campaigner Julien Vincent told AAP.

UNESCO has already raised concerns with the developments and is now undertaking a week-long assessment of the region.

Environmentalists are concerned that the increase in shipping through the Great Barrier Reef, will raise the risk of a significant spill.

The incident led to increased monitoring of ships passing through the Great Barrier Reef.

“The Great Barrier Reef is one of the jewels in the World Heritage crown,” said Irina Bokova, UNESCO director-general shortly after the accident. “It is also an extremely vulnerable ecological system that requires careful protection. I welcome the proposed new measures.”

Concerns over the construction of the new facilities have also been raised by local seafood industry, which claims that dredging for the new harbour projects is causing disease among fish stocks.

Australia is a major coal exporter with China among its major customers.