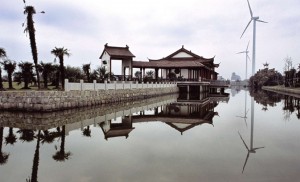 With China the world's largest emitter of greenhouse gases, experts say low-carbon collaboration with the country would provide huge benefits

A China-UK taskforce could help drive low-carbon collaboration between the countries, according to UK experts.

Speaking at an Energy and Climate Change select committee meeting, experts from research groups and universities from across the country said that collaboration with China in low carbon research offered huge potential.

They warned, however, that first the UK would have to do the groundwork and build the trust, something which would involve a coordinated approach.

China’s previous experiences of UK collaborations left them unsure about future programmes, according to Nick Mabey from environmental thinktank E3G.

“The real blockages from the UK side are there’s no person and there’s no priority,” he said.

“It virtually needs a UK-China taskforce, to pull the resources that are around Whitehall into something a bit more coherent rather than at the moment a lot of individual engagement that doesn’t get above the threshold of impact.”

Mabey spoke of the previous promises made to China – the world’s largest carbon emitter – at both UK and EU level.

These included projects focusing on Low Carbon Zones and Carbon Capture and Storage that have not been delivered on.

However – where projects have been implemented in the past,  experts on the panel said there has been some success.

Felix Preston from Chatham House pointed to the first pilot of an adaptation project in North West China as an example of UK success abroad.

Preston’s sentiments were echoed by Professor Samuel Fankhauser, from the Grantham Institute, who have called for a China Unit to be incorporated into the Department for Energy and Climate Change (DECC).

“I think the idea behind it was China is maybe one of two countries who could have an active influence over global greenhouse gas emissions,” he said.

“It could be in the Foreign Office, it could be in DECC, and it be in a number of place. A lot of what needs to happen requires technical skills and requires an understanding of greenhouse gas and energy issues as much as it requires understanding China issues – I would be worried if that didn’t exist in DECC.”

And according to Corrine Le Quéré, from the University of East Anglia’s Tyndall Centre, Chinese academics could hold the key to building bridges with the government.

“They trust their own academics. They do not trust the UK and so in order to build trust with China we have to go do the groundwork…we have to build relationships with Chinese academics and have talk to policy makers.”

The University of East Anglia has already set up a number of research projects with Chinese academies, with the aim of mirroring the Tyndall Centre’s eight university consortium in the UK.