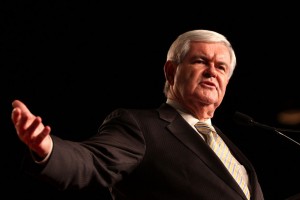 Newt Gingrich has mocked algal biofuels, which the US Navy is pursuing with vigour. (Source: Gage Skidmore)

Republican Presidential candidate Newt Gingrich has repeated his mocking of algae based biofuels, despite the fact that the US Navy has conducted the world’s largest trials of the technology so far.

At a campaign event on the eve of Super Tuesday, Gingrich mocked a recent speech by President Obama on energy.

“Maybe we should, as an experiment, get some algae and go to a gas station, and you know, sort of the ‘Barack Solution.’ Would you like some algae instead of gasoline? This is the kind of stuff that’s Cloud Cuckoo Land,” Gingrich said.

In January this year, the US Navy trialled 20,000 gallons of algal fuel in 50:50 mix with conventional fuels.

Despite the very real nature of algae based biofuels, Gingrich has been mocking the President’s reference to it last month, ever since.

“But presidents are supposed to, like, run the country today.”

Speaking at the time of the Navy trial, Lieutenant Commander Frank Kim said: “It’s going to be pretty amazing to see where these fuels take us in the future. This might be the largest demonstration to date but it is not the last.”

“We use the same types of trucks, hoses and other dockside equipment to transfer the fuel, and no modifications are required either from a fuelling perspective or on the shipboard side,” said Lt. Cmdr. Kim.

If elected, Gingrich would become Commander and Chief of the US armed forces, which believes climate change is a clear and present danger to national security.

The Department of Defense has described climate change as “threat multiplier” that jeopardises national security.