Election 2012: Romney, Santorum, Gingrich and Obama on US energy future 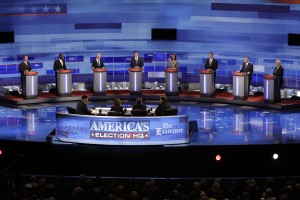 A Republican candidate debate prior to the field being whittled down to the remaining four. (Source: IowaPolitics.com)

As voting on Super Tuesday gets under way, RTCC examines the energy policies of the three leading Republican nominees and the man they have to beat, President Obama.

There has been plenty of scrutiny on the candidates’ positions on climate change.

Regardless of these, all the candidates have taken strong positions on energy.

Whether those responsible believe in climate change or not, the position and policies of the US, currently the world’s largest economy, will have serious ramifications on global CO2 levels.

The first pledge on Rick Santorum’s official campaign website is to “unleash America’s energy”. This, he says, he will do on day one of the job.

He also pledges to leave decisions on oil exploration – including fracking – up to individual states.

While environmentalists may be split on nuclear energy, they may well be united in concern at the prospect of relaxed permitting for reactors.

As well as looking to slash regulation and permitting criteria for nuclear and fossil fuels, Santorum also wants the country to invest in research on mix of energy sources including “oil, natural gas, hydro, biomass, wind, solar, clean coal, and nuclear energy”.

The bulk of Santorum’s energy policy is set firmly in the framework of removing foreign dependence on oil.

The pledge for $2.50 gasoline is plastered across the front page of Newt Gingrich’s campaign website. The current price is around $3.70.

“Our choice is between energy independence and never again bowing to a Saudi King; and $2.50 a gallon gasoline,” said Gingrich in a speech in February.

Although many of Gingrich’s policies are the similar to Santorum’s, there is more detail about how America might attempt buck the cost curve set by international oil prices.

As well as supporting the full development of the country’s shale resources, (which he claims are triple the size of Saudi Arabia’s oil reserves) he calls for extended oil drilling activities.

This includes deepwater drilling in the Gulf of Mexico, in the Chukchi Sea in the Arctic and onshore in Alaska. He suggests sharing the Federal royalties with coastal states to ease the path for deepwater oil.

These policies he says, would remove any dependence on Middle East resources.

Renewable research will be funded but there are no major, documented intention to deploy clean energy in large quantities.

Mitt Romney echoes many of the policies of his two remaining Republican rivals including on Keystone, shale gas and widening nuclear energy.

He was scathing on Obama’s rejection of Keystone XL and has called for the country to pursue energy independence. Unlike his rivals however, Romney has talked not only about supply, but also about demand.

As far back as 2006 Romney said: “We’re using too much oil. We have an answer. We can use alternative sources of energy – biodiesel, ethanol, nuclear power – and we can drill for more oil here”.

He too calls for cuts in regulation for oil companies but with fast-track applications reserved for companies with “established safety records”.

A vague statement calling for US resource developers to “forge partnerships” with neighbouring countries could be read as cooperation with Russia of Arctic resources in the West, or a nod the US taking greater ownership of tar sands projects with Canada to the North.

Renewables are again, to be the subject of research and development funding, rather than large-scale deployment.

Those expecting a huge swing in energy policy from the Democrat nominee may be surprised.

On many of the major energy issues, President Barack Obama does not differ too largely from his Republican rivals.

The President has promised to expedite construction of the Oklahoma to Texas pipeline to relieve a bottle neck of supply on its way to refineries.

Where the Republican candidates have been playing up energy independence, Obama has recently been pointing out that despite what prices at the pumps suggest, the US is currently not in a bad position.

In a speech less than a week before Super Tuesday, that dependence on foreign oil dropped below 50% for the first time in 13 years.

On renewables, Obama will be the only candidate in the 2012 election talking about wind, biofuels and solar in terms of deployment.

While Obama is very much pro-fossil fuel exploitation, his approach is more cautious.

He recently stated his support for shale gas exploitation but made no promises to cut the regulations that are binding the industry to tight environmental laws at present.

Perhaps the greatest difference between the parties’ respective candidates comes with the issue of fossil fuel subsidies. The President has reiterated his wish to remove subsidies for the fossil fuel industry, a move. Critics say cutting the subsidies would jeopardise jobs.