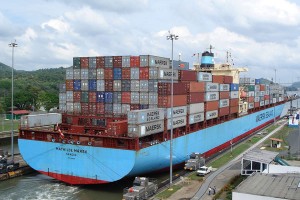 A container ship passes through the Panama canal. Shipping accounts for 3% of the world's emissions. (Source: Flickr/jpmartineau)

The UN’s maritime body and the EU look set to clash over CO2 emissions from shipping after the latest internal talks ended in a stalemate.

The EU, which has already begun tallying CO2 emissions for all flights into or out of its airports, is keen to establish a similar framework for international shipping.

The IMO insists that the best way to progress is through an all-encompassing global deal.

“Let us work together and set ourselves the challenge of completing all of the work on the establishment of a market-based measure by a target year of 2015,” said Koji Sekimizu, IMO Secretary-General at the start of the talks.

Shipping is responsible for 3% of all the world’s greenhouse gases. The 15 biggest ships in the world emit as much sulphur oxides as 760 million cars.

The IMO is currently assessing nine different market-based mechanisms to address emissions at sea and hope to have an impact assessment study prepared by 2013.

The EU however, is unhappy with this timetable.

“While we have a clear preference for global action on measures to reduce emissions from shipping, we don’t see the IMO on track to deliver reductions consistent with the globally accepted maximum 2°C objective [to prevent dangerous warming],” a European Commission spokesperson told Reuters.

The EU’s decision to establish an aviation carbon emissions scheme for airlines has been met with stiff opposition and labelled as “unilateralism”.

However, the EU argues that the scale of the carbon tax is small.

An independent study found that the surcharges applied by some carriers to cover the costs of the carbon tax will generate additional profits for the companies involved.