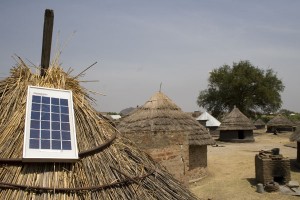 One of the big opportunities climate action has presented the developing world is the chance to leapfrog a generation of energy technology straight into clean, green generation.

That aspiration is all good and well but in reality, exporting clean technology into some of the poorest parts of the world creates numerous logistical and financial challenges.

Now a British company thinks it has a potential solution.

Cambridge-based Eight19, named after the eight minutes and 19 seconds it takes light from the sun to reach earth, has developed the technology, and the business plan to tackle these challenges.

Customers pay an up-front fee of $10 for a 3W solar panel, battery, two LED lamps, a phone charging unit and a module that enables them to purchase electricity using their mobile phone.

“In Kenya for example we provide solar power for around $1 a week,” says Simon Bransfield-Garth, CEO, Eight19.

“They tell us they are saving about $2 a week on kerosene and a further $1-1.5 on the electricity that they would have to spend on putting electricity into their mobile phones.”

The company was spun out of Cambridge University and is built around the development of a new organic solar cell that can be printed onto flexible plastic sheets. These will begin to enter the market later this year.

“The plastic solar cells will reduce the overall cost of the installation. If you put solar cells on your roof in the UK probably half the cost is for the framing, wiring, the metalwork and everything else that goes around the solar panels,” claims Bransfield-Garth.

“You can’t put a 30kg solar panel onto the traditional thatched roof of a home in Malawi. With the plastic film, you can just literally stick it onto the roof.” 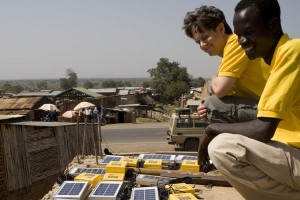 There 1.4 billion people without electricity in the world according to Bransfield-Garth, 300 million of which are in sub-Saharan Africa.

And this is where Eight19 will concentrate its efforts. Since its first install in Kenya in September, 2011 the company’s IndiGo system is now in Malawi, Zambia and South Sudan as well.

As well saving huge volumes of carbon emissions and pollutants, Bransfield-Garth says their first customers have cited some other surprising fringe benefits.

“We thought avoiding Kerosene fumes would be a really big driver for these sorts of things. Kerosene fumes kill 1.5 million people a year, that’s more than malaria. But in reality, if you have been brought up with kerosene fumes for ever, you have a slightly different view on that sort of thing.”

In fact, the ability to charge mobile phones, is the biggest advantage, more so than the lighting, their customers have said.

“We also had a mother tell us that she feels able to leave her kids at home alone for half an hour without worrying that they are going to knock over a kerosene lamp and burn down the house,” says Bransfield-Garth.

Customers will on average take 18-24 months to pay for the full cost of their system.

“We’re running on commercial terms but it’s not our job to go and exploit some of the poorest people in the world. That’s why we have this upgrade initiative. We could charge a $1 a week indefinitely on the basis that that is half what they were paying for kerosene,” says Bransfield-Garth.

At this stage customers can either buy the 3W set-up outright or they can upgrade to a larger 10W system that supports an additional two lights and a radio.

“If someone moves along this path they can go from being a rural farmer disconnected from the world, to having access to media and the internet.”