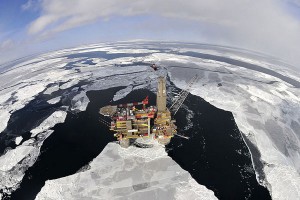 Operations in Arctic water off the coast of Russia are at an advanced stage. (Source: Flickr/Shell)

The WWF will not pursue an indefinite ban on oil drilling in the Arctic, the organisation has told a UK parliamentary committee.

Giving evidence at an Environmental Audit Committee, UK representatives of the group’s Global Arctic Programme said they had to remain realistic with their strategy for Arctic drilling.

“We try not to use words like ban or moratorium,” Mikhail Babenko oil and gas officer, WWF global arctic programme.

“We have to be realistic. Some deposits have already been discovered, in Russian waters for example, and drilling will begin there this year.”

Instead, the WWF plans to focus on areas that are particularly vulnerable, social, culturally and environmentally, and will seek to set up “no go areas”. There are currently two such protected areas, Bristol Bay in Alaska and the Lafoten Islands in Norway.

Asked about the UK government’s position on the Arctic, the WWF replied that there was a lack of clarity in some areas and contradiction in others.

“The government [is] promoting a low carbon economy and tackling carbon emissions yet also looking at the Arctic for energy security,” said Rod Downie, polar policy and programme manager at WWF-UK.

“The WWF can’t think of a less strategic way to pursue energy security than going after high risk oil in the arctic. We already have more fossil assets than we can use to stay within 2°C of warming, so moving into new areas of exploration would be absurd,” claimed Downie.

The group is calling for the Arctic Council, made up of the countries with territory in the region, to introduce a legally binding mechanism for cooperation in the event of an oil spill in the region.

Currently there does not appear to be any system for responding to a spill in ice-filled waters, which require ships to have strengthened hulls.

Last year the Arctic Council signed an agreement to cooperate on search and rescue missions in the region.

WWF are also calling for oil companies to develop arctic specific standards to make their operations as resilient as possible.