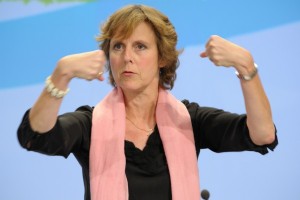 Worldwide fossil fuel subsidies were estimated by the IEA to be worth $409 billion in 2010, with subsidies to oil products representing half that total.

They can encourage excessive energy consumption and lead to distortions in the market, and an inefficient allocation of resources, particularly in countries that import large quantities of fossil fuels.

Speaking after a meeting with Brazilian ministers in Rio, Hedegaard, who is also leading the EU’s battle to enforce an emissions tax on airlines using European airspace, said she hoped June’s summit resulted in tangible goals.

“We must internationally get the pricing right. The way we measure GDP today… we must take care that there is a price attached to harming the common environment,” Hedegaard said.

“One place to start would be to phase out fossil fuel subsidies.”

“In Europe we think it is very important to have the Sustainable Development Goals. Or at least take a decision in Rio that we should have these,” Hedegaard said.

And she suggested that one of the goals at the Rio conference should be universal access to renewable energy in 2030.

“If the political will is there, we can do tangible things. There are very specific things we can do,” she said.

“It is extremely important at this point in history that Rio delivers a tangible outcome, something that citizens can relate to.”