Lord Stern: Climate action an opportunity not a cost 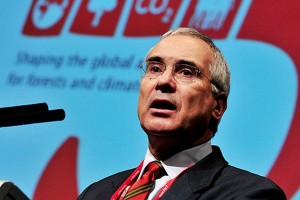 Flawed economics could lead the world into “catastrophic” changes, the economist Lord Prof Stern has warned.

The author of the influential Stern Review of the economics underpinning climate change, said that allowing the world to rise by 3-4°C will lead to a “catastrophic rewrite of the relationship between humans and the planet within the lifetimes of those being born today”.

The Stern Review calculated that it was significantly cheaper to pay now to reduce the impact of climate change, than it would be to pay for the consequences of dangerous warming.

Stern also claimed that “flawed economics” is being used to delay action on climate change.

“Some also suggest that we cannot afford to take action to ‘save the planet’. But low-carbon growth will be full of discovery and the costs of many green technologies are falling fast,” he said at the Lionel Robbins Memorial Lecture Series in London.

“Past industrial revolutions involved transformations that drove two or more decades of strong innovation and growth, with investment flowing to the pioneers.”

Lord Stern is the Chairman of the Grantham Research Institute on Climate Change and the Environment at LSE.