The world according to Santorum 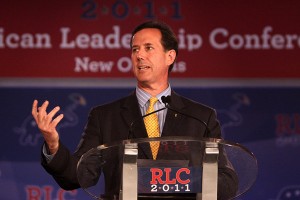 Rick Santorum has surged to the front of the Republican pack in recent weeks. (Source: Flickr/Gage Skidmore)

While most scientists do their best to avoid politics whenever they can, the reverse is not true – particularly the campaign to win the nomination for US Republican Presidential candidate.

And it could be more spicy tonight in the latest TV debate.

Favourite Mitt Romney is flagging, Newt Gingrich is running out of puff and cash, leaving Rick Santorum in an unlikely lead.

Some say the brand of evangelical Catholicism preached by Santorum is as divisive and hate-fuelled and as any other form of fundamentalism. Others regard him as a man true to his beliefs and principles.

RTCC runs through some of the key comments from potential Presidential candidate Santorum during the campaign so far.

“Pick a point in history where you haven’t seen a change in the climate. The climate does change.”

A good start but why do you get the sense there’s a “but” coming up.

“And I think history points out that it does that [climate does change] and that the idea that man, through the production of CO2 – which is a trace gas in the atmosphere, and the man-made part of that trace gas is itself a trace gas – is somehow responsible for climate change is, I think, just patently absurd.”

“Why have we decided that this one particular factor, carbon dioxide, is in fact that tip of the tail that wags the entire dog. Why from a scientific point of view do we make the assertion that this is in fact what is the case when there is a whole lot of other factors out there that could be affecting it?”

Assuming for a moment that it’s not absurd, what might Santorum do about it… 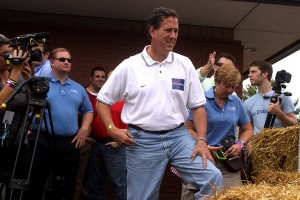 The scientists (which he disregards) say there is no solution (to the problem he doesn’t think exists). If you can piece this contradiction together, he is still wrong. The path required is clear. The UN climate talks in Durban last year reinforced the fact that 194 countries are in agreement.

Most recently, Santorum described climate science as “phony studies” and “political science” and strongly rejected accusations that he is anti-science. Presumably he is just anti-American Geophysical Union, anti-Geological Society of America, anti-American Meteorological Society not to mention a swathe of Academies of Science from Asia, Africa and Europe.

“We were put on this Earth as creatures of God to have dominion over the Earth, to use it wisely and steward it wisely, but for our benefit not for the Earth’s benefit.”

Iran’s state media, PressTV, has referred to Santorum as a “flat-earther” when it comes to climate change. But he clearly adopts a similar line on other issues too. Here’s a best of the rest.

“One of the things I will talk about, that no president has talked about before, is I think the dangers of contraception in this country. It’s not okay. It’s a license to do things in a sexual realm that is counter to how things are supposed to be. [Sex] is supposed to be within marriage. It’s supposed to be for purposes that are yes, conjugal…but also procreative.”

A recent poll by AP/GfK asked prospective voters who they would vote for in November if it was Santorum versus Obama. The incumbent president won 52% to 43%.

It perhaps says something about the Republican field of candidates that none of the four remaining Republicans could get within seven percentage points of Obama. Despite Santorum’s lead against his GOP rivals, his electability among the US public is only 32% accordig to Gallup (Romney scored 54%).

Santorum has enjoyed relative shelter so far with the two former leaders and the outspoken Rick Perry stealing the headlines. Closer scrutiny, starting with tonight’s debate, could make or break his charge.