Could airlines profit from the EU carbon trading scheme? 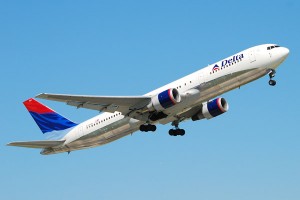 Some US airlines could generate an extra £1m a year per EU route from additional surcharges (Source: flickr/Andrei Dimofte)

Could airlines profit from the EU carbon trading scheme? Guest authors Annie Petsonk and Adam Peltz of The Environmental Defence Fund, say they could pocket millions.

This week, more than two dozen countries, including the United States, are meeting in Moscow to discuss their opposition to Europe’s pioneering law to cut global warming pollution from aviation.

On the agenda for the Moscow meeting are a number of topics that have been lobbied for by the US aviation industry, which has said complying with the EU law will be too expensive.

US airlines have been complaining for years that complying with the EU law will cost them billions of dollars, but we’ve also seen a slew of studies that show the airlines could save money – and even profit – by participating in the system.

So we commissioned EDF’s economics team to run some numbers.

When our economists compared the four criteria below, we found that airlines that comply with the law can actually make money.

1] airlines’ projected 2012 emissions (based on the 2010 data they submitted to the EU and the industry’s projected 3% annual emissions growth rate),

2] data on the free emissions allowances the EU is giving to the airlines, and

3] current prices (from Feb. 15) for emissions credits in the EU carbon market with

Based on these data:

Delta Air Lines, which was the first carrier to impose a surcharge, could profit between $1.02 and $2.53 per ticket from Minneapolis, or $449,000 to $1.1 million annually on its Minneapolis to Amsterdam flight.

US carriers aren’t the only ones finding profit in the emissions cap; airlines around the world could be poised to profit, too:

Etihad Airways’ $3/ticket surcharge could net between $1.10 and $2.52 per passenger per flight* from Abu Dhabi to London.

Aeroflot Russian Airlines, if it matched United’s $3 fare increase, could make between $2.26 and $2.69 per ticket* on a typical flight from Moscow to Berlin.

It’s critical to remember the purpose of the EU’s law is to cut pollution. The aviation sector is growing so rapidly that, if emissions from aviation were left unregulated, they would quadruple from 2005 levels by 2050; the EU law will cut 183 metric tons of carbon dioxide annually by 2020, the equivalent to taking 30 million cars off the road every year.

The data show that airlines’ claims of suffering a disproportionate burden and punitive costs to meet the cap are wrong. Savvy companies will see the law not as the burden that it isn’t, but as the opportunity that it is, and we would hope the airlines direct any profits to technology that can help them further reduce their emissions and fly cleaner and greener.

(*These airlines’ ticket sales numbers are not publicly available so we are unable to calculate their potential annual profits.)

Annie Petsonk is International Counsel with The Environmental Defence Fund

Adam Peltz is a Legal Fellow with The Environmental Defence Fund