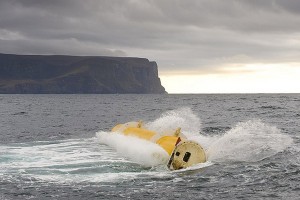 The Oyster wave power generator is one of seven different prototypes deployed in the UK (Source: Aquamarine Power)

The UK must not miss out on a huge economic windfall in the marine energy sector, a new MPs report has warned.

The Energy and Climate Change Select Committee said that the country could be generating £76bn a year by 2050, its share of a £340bn industry.

The UK is currently the leading developer of marine energy technology with seven of the world’s eight full-scale prototypes deployed in the country.

“Britannia really could rule the waves when it comes to marine renewable energy,” said Tim Yeo MP, Chair of the Committee.

“We are extremely well placed to lead the world in wave and tidal technologies, which could potentially bring significant benefits in manufacturing and jobs, as well an abundant supply of reliable low-carbon electricity.”

The report, released yesterday, also predicted that wave and tidal power generation in the UK could supply as much as 16% of the country’s electricity demand, based on 2010 usage.

The committee also warned that unless the progress made so far in developing marine technologies is nurtured fully, the opportunity could be missed.

“”In the eighties the UK squandered the lead it had in wind power development and now Denmark has a large share of the worldwide market in turbine manufacturing,” said Yeo.

The UK is home to the European Marine Energy Centre in the Orkney Isles.

Last month a £100m marine energy park of the South West coast of England was announced.