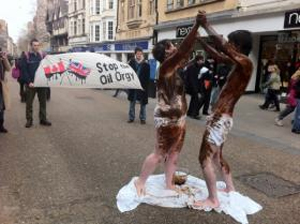 The UK must support EU legislation to effectively ban the import of tar sands oil into the continent, according to student movement People and Planet.

The Fuel Quality Directive (FQD), which the EU Commission will vote on this Thursday (Feb. 23), would see oil produced through tar sands extraction reclassified as highly polluting.

The Directive would mean it was assigned a default value of 107 grams of carbon per megajoule, showing buyers its environmental impact. Conventional crude oil is rated at 87.5 grams.

People and Planet says the new legislation would also have the potential to spread around the world, and seriously damage the tar sands oil industry.

Richard Ganly from the group told RTCC: “It is a very significant piece of legislation because it has the potential, if picked up by other countries and markets around the world, to seriously damage the economic argument for the tar sands exploitation.

“It is really important for us to get this trail blazing piece of legislation to go through and it is really important that it happens now because at the moment, the European businesses and markets have not come to rely on high polluting fuels like the tar sands,” said Ganly.

“If we leave it till a few years down the line we’re expecting that businesses and transport systems will come to rely increasingly on this tar sands oil and jobs will be at stake. It will become incredibly difficult to reverse if tar sands ever become a significant part of our fuel economy.”

The group are calling on students to lobby the British government to support the FQD this week, after intense lobbying from the Canadian government and oil companies based in European nations with active business in Canada.

The groups E-action campaign calls on Deputy Prime Minister Nick Clegg and Under-Secretary of State for Transport, Norman Baker to vote yes to the FQD alongside the majority of countries People and Planet says support the Directive.

“Most of the countries are in favour of the fuel quality directive but Norman Baker who is our minister on this is still dragging his feet so Britain is really the biggest obstacle in the way of the legislation passing,” said Ganly.

Protests against tar sands oil extraction have already been seen in Canada and the US (source: tarsandsaction/creative commons)

The ministerial talks this week are expected to be difficult, and unlikely to get a qualified majority. If there is a stalemate, the debate could shift from EU technical experts to a discussion among ministers. The Commission could even decide to amend its proposal.

Human side of the tar sands story

People and Planet are also using the vote this week to highlight the human plight of the tar sands oil extraction.

This Tuesday (Feb .21) they will be previewing a documentary film, produced by Zoe Broughton and Pete Speller of Campbell Road Productions, which documents People and Planet’s Youth Exchange.

The exchange saw a group of students from the organisation travel out to Canada and meet with an indigenous first nations people in Alberta, the Beaver Lake Cree. Young people from this community then traveled over to the UK.

“The Beaver Lake Cree have had land seriously damaged and polluted by the tar sands extraction by the oil companies,” said Ganly, who was involved in the trip. “The animals they hunt are going extinct, the forests they live in are being seriously damaged.

“When we went over there we met people who have literally had incredible pressures placed upon them and they have been through an awful lot and they have got incredibly moving stories.”

“We wanted to get these stories out to the wider public in the UK before it is too late to do any action that would really help them.”

“Tarmeggedon” will be shown at the Amnesty International Human Rights Action Centre in London.

Get involved in the People and Planet e-action here.