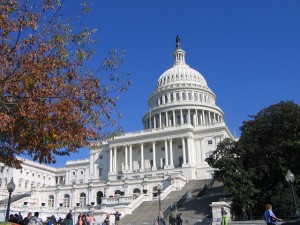 While the provision for the Keystone pipeline passed the House, there are still no guarantees it will pass the Senate (source: Rob Crawley)

Legislation that would force US approval of the Keystone XL Pipeline passed through the House of Representatives, despite intense protests against the plans.

Attached to an energy bill, part of broader House Republican plans to fund highway projects and infrastructure projects; the legislation effectively takes the decision on the pipeline project away from President Obama – who last month put the project on hold.

The bill also includes plans to expand offshore oil drilling and open up parts of the Arctic National Wildlife Refuge to drilling.

The approval in the House – which was widely expected – came just days after a protest, organised by environmental groups including 350.org and the Natural Resources Defense Council, gained over 700,000 signatures against the project in just 24 hours.

The Bill will now move on to the Democrat-controlled Senate, where it would need 13 Democrats to support it for it to move forward. A two-thirds majority is required in the Senate.

The Bill would also still need Obama’s approval to become law, and he has already threatened to veto the House package, due in part to the Keystone provision.

Last month Obama put a halt to the project largely on the basis that more environmental considerations were needed, with the potential for a new route that would not pass through the Nebraska aquifer – which lay at the heart of opposition.

Environmental groups are also opposing the pipeline due to the carbon intensive nature of tar sands oil extraction.

Supporters of the project say the pipeline will bring jobs to the US, while securing the country’s energy supply.

They say they will not give up on the project, even if the current proposals are rejected by the Senate.

Senator John Hoeven, a Republican from North Dakota and advocate of the project told Reuters: “I think on the merits we’re going to get it done. I don’t know when. I hope in the highway bill, but if not, we’ll stick with it.”