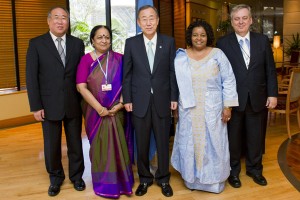 Developed countries have damaged their credibility and must now take the lead on climate action, according to the most recent communiqué from the BASIC group of countries.

The bloc, which includes Brazil, China, India and South Africa, met earlier in the week for the first time since the UN talks in Durban concluded.

The statement released by the bloc broadly welcomed the Durban Platform on the condition that negotiations continued to include the concept of “common but differentiated responsibilities”. It also re-emphasised that the agreement was built on “a carefully balanced package of ‘mutual reassurances’ between the parties”.

A strong stance on the efforts of developed countries was outlined, particularly in light of Canada’s withdrawal from the Kyoto process.

“Any attempts by developed countries to casually set aside their existing legal commitments while calling for a new legally binding agreement seriously questions their credibility and sincerity in responding to the climate crisis,” read the communiqué.

“Developed countries must rise up to their historical responsibilities and take the lead in the fight against climate change by undertaking robust and ambitious mitigation commitments consistent with science,” it continued.

The BASIC group has strong ties with a number of other negotiating groups at the UN climate talks including the Least Developed Countries (LDCs), Small Island Developing States (SIDS) and the G77+China bloc.

The statement also reaffirmed the solidarity between the fast-developing BASIC countries who continue to have much in common with their less well-off allies.

Parties to the UN climate talks are currently preparing their positions ahead of the next scheduled meeting in Bonn this May.