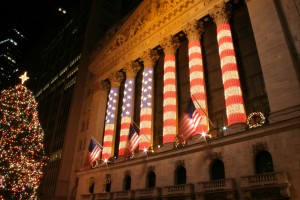 Wall Street and other centres of business are key to securing the necessary finances to tackle climate change (Source: MediaCommons/Zoonabar)

The leaked documents from the Heartland Institute reveal that some surprising firms have funded their work, a large part of which involves climate scepticism, but is there any alternative to the private sector for funding climate action?

Finance took a front and centre position at the UN climate talks in Durban last year.

The Green Climate Fund was fairly high on the agenda as country’s looked for ways to raise the $100bn a year proposed by the Cancun Agreement at the previous year’s round of talks.

This is the scale of funding required, and right now, governments don’t have it to spare.

The EU, China, Australia and South Korea have all put their faith in carbon markets.

Many countries including Germany and the UK are looking to leverage small amounts of public money to generate private funds for domestic plans.

Regardless of your own personal feelings on corporate social responsibility, the money is well spent and the intentions behind it are ultimately irrelevant.

The $60,000 contribution that Microsoft made to the Institute raised eyebrows over its intentions. But if money talks, this is barely a whisper.

In the same year, Forbes compiled a list of the 78 most generous companies in America. In total they donated $3.8 billion to good causes. That’s almost $50m each.

Climate finance has nothing to do with generosity however. There is money to be made and institutional investors, like the CalPERS pension fund (worth $224bn), are desperate to sink money into green investments.

They say however, that they are held back by uncertainty surrounding government’s commitment to supporting policies.

Just like Climategate in 2009, “deniergate” is damaging, but regardless of which direction the boat is rocking in, it can’t be helpful for those looking for stability, not controversy.

The contents of these documents add flesh to the theory of environmentalists that special interest groups, backed by wealthy individuals and certain businesses, are pushing the climate change agenda.

The Heartland Institute has issued a statement saying that it can not verify the accuracy of the leaked documents and asserts that at least one of them has been falsified.