Satellite Photo: Destruction of the Mangrove Forest of the Sundarbans 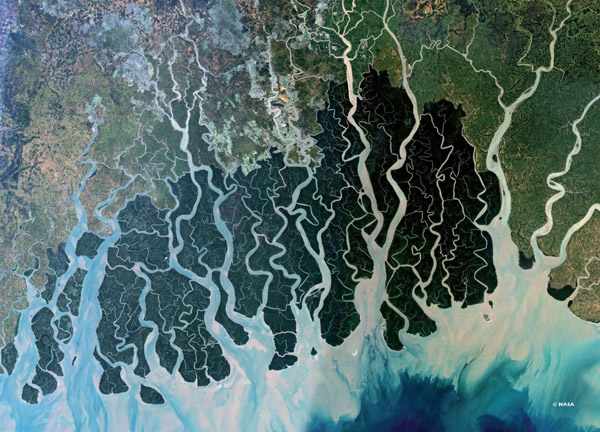 This satellite image shows the Bay of Bengal where the rivers Ganges, Brahmapoutre and Meghna meet the sea, otherwise known as the Sundarbans.

With over 10,000 km² of land and water, the mangrove forests of the Sundarbans are the largest in the world.

They also host endangered species such as the estuarine crocodile, Indian python and the iconic Bengal tiger.

There is a continuous natural subsidence in the Sundarbans, which causes sea level to rise by about 2.2 mm every year.

If the sea level was to rise by 45 cm worldwide as a consequence of climate change, 75% of the Sundarbans mangroves could be destroyed and many species would be affected.

This image was first produced and shown at the UNESCO Outdoor Exhibition ‘Satellites and World Heritage Sites, Partners to Understand Climate Change,’ shown at COP16 in Cancun, Mexico.

Developed in close partnership with Planet Action, the German Aerospace Center, the European Space Agency and the Belgian Federal Office for Science Policy and supported by the Flemish government the exhibition traveled through Mexico, to China and to the UNESCO headquarters in Paris as well as being shown at COP17 in Durban.

RTCC, in partnership with UNESCO, will be showing one satellite image daily this week. All information, both image and text corresponds to the exhibition panels.

More information and the full exhibition can be viewed here.