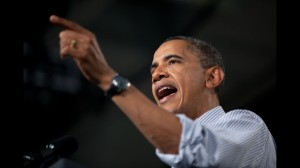 The budget is highly unlikely to be passed and is considered as a political statement rather than an enforceable plan.

“We need to reduce our dependence on foreign oil by ending the subsidies for oil companies, and doubling down on clean energy that generates jobs and strengthens our security,” said President Obama.

Funding for Department of Energy’s research arm is earmarked to remain stable at $325m with a separate fund looking at other clean technology, such as electric cars receiving $420m.

The current raft of tax breaks and incentives for fossil fuel companies, totally $40bn, would be cut under the proposals.

The document, which Obama described as “a blueprint for next year’s budget”, also includes an extension of the loan capacity for nuclear energy facilities from a maximum of $18bn to $54bn.

Interestingly, funding for carbon capture and storage (CCS), listed on the budget as the “Clean Coal Initiative”, has been removed.

Energy efficiency was also central to the proposed plan with a $6bn residential retrofit scheme included.

The document also includes some initiatives within the Government itself. It proposes that the Treasury should go paperless, with a saving of $500m and embassy roofs should be painted white to cut bills for air conditioning.

“For the fourth year in a row, the White House should have written its budget in red ink instead of black,” said Republican Conference Chairman Jeb Hensarling.

“It does nothing to address the real drivers of our debt, but does everything to accelerate our nation’s slide into bankruptcy,” he added.

Obama faces a further test of his green credentials this week as Republicans attempt to push the Keystone XL pipeline, which he rejected last month, through the Senate.