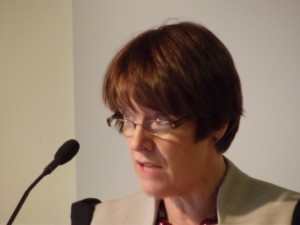 The world must set goals towards a greener economy at the Rio+20 Earth Summit in June, said UK Environment Secretary Caroline Spelman today.

Speaking at an event at London Guildhall, Spelman set out her vision for what should be achieved at the conference taking place in June in Rio de Janeiro.

“Our economic and environmental security relies on an ambitious outcome from Rio+20. The event has to be a workshop not a talking shop,” she said.

“The international community has not made sufficient progress on important world challenges such as food security, access to clean water and sustainable energy.

“We need urgent action now. Sustainable development goals can drive international action on these key issues and build on the success of the Millennium Development Goals.

“I will be pushing for real progress on new goals to set us on the right path to a greener and more sustainable world.”

Spelman also said countries must move away from using GDP as the sole measure of progress towards what she termed “GDP+”.

This would see governments also measure the value of natural resources and their people’s well-being as measures.

While Spelman – who will be leading the delegation in June – said the UK was leading the way on the concept, the government has come under criticism as Prime Minister David Cameron will not be attending the talks.

MPs have called for him to be there in order to show the UK’s commitment to the transition to a low-carbon world economy.