Paying for climate change: The crucial role of stable policy 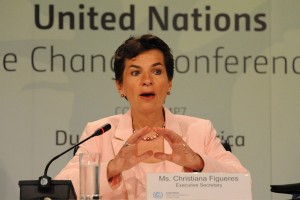 The long-running battle between the UK’s Department for Energy and Climate Change (DECC) and the country’s solar industry demonstrates the make or break role of stable policy in funding climate action.

Whether it’s in the form of a subsidy framework, investment in emerging energy efficiency sectors or a fully fledged cross-border carbon market, policy holds the key to success. The private sector holds the cash.

The head of the UN climate change agency, Christiana Figueres has said repeatedly that public and private sector collaboration will be key to funding climate action. The debate over the pace of subsidy cuts for the solar sector in the UK shows what happens when this relationship degrades.

The change in the pace of cuts to the feed in tariff led to DECC and industry representatives facing off in court. Even today, there is continued confusion as the government revealed its next round of proposed changes.

“Many businesses are calling for greater regulatory certainty at the UN or the national level,” says Jonathan Grant, director of climate policy at PwC UK.

“The success of investments in new infrastructure or new products, whether conventional or low carbon, is often dependent on regulation, or the lack of it, such as a carbon floor price, feed in tariffs, biofuels requirements, and energy efficiency standards,” he says.

The role of these regulations permeates deeper than the clean energy market however.

“Whether you are building a new power plant or developing a new car, climate policies can have a huge impact on costs and revenues. Uncertainty in the regulatory outlook hampers low carbon investment and delays investment more broadly. In addition to impacting on what companies invest in, regulatory uncertainty will also affect where they choose to invest.”

This point was taken up by the UK’s shadow energy and climate change minister Caroline Flint, who says that even “throwaway remarks have real market consequences”.

This was a reference to comments by the chancellor in autumn 2011 that the UK would not “save the planet by putting our country out of business”. Flint believes that these comments can raise the cost of borrowing for those looking to make green investments in Britain.

Adam Matthews, secretary general of GLOBE International says that domestic regulation is also key to generating the international climate finance that forms a major part of the UN’s climate change strategy. The proposed Green Climate Fund has a target of generating $100bn annually by 2020.

“Ultimately it’s about regulatory structures that provide security and a clear direction of purpose that will generate the income,” says Matthews.

“Governments have to be pressed on the commitments [to the GCF] and that will come from the Parliaments.

“How we can ensure countries meet their commitments is by making sure the Parliaments in those countries are pushing their governments to keep the commitments they have made and by ensuring that it is new money. It must not be repackaged money. I think that is an absolutely critical point.”

Speaking to RTCC last year, Stephanie Pfeifer, executive director of the International Investors Group on Climate Change (IIGCC) said that private sector money, including the $6 trillion of assets held by its members, could make a difference.

“An international framework would help with investor confidence. So we are very supportive of the UNFCCC process,” she said. “I think there is still a lack of understanding of the role that private sector capital can play.”

As well as building that understanding, legislators must also build the correct environment for investment. The market seeks profits. Pension schemes are legally bound to get returns. Hampering the ability of the private sector to do what it does best, cuts off the only feasible and sufficiently large supply of cash needed to pay for climate change.

The UK solar sector has undergone sustained pressure during the period of uncertainty. Even as the government seeks to create stability, the damage already done to the industry casts a dark shadow over its previously sunny prospects.

VIDEO: Hear what Alstom, Philips and Bank of America had to say on policy at the RTCC side event at the UN climate talks in Durban.

International Chamber of Commerce SideEvent from Responding to Climate Change on Vimeo.