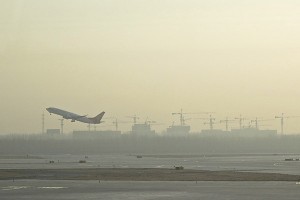 The smog in Beijing can become so severe that it grounds planes (Source: flickr/IK's World Trip)

The Chinese Government has revealed a drastic set of proposals to combat air pollution in the nation’s capital with old cars and heavy industry targeted.

State media reported that 1.6 million high-emitting vehicles will be removed from the roads by 2020 as part of measures to reduce air pollutants by 15% by 2015, compared to 2010 levels.

The target is based on fine particulates – small airborne particles, 2.5 micrometres in diameter – from exhaust fumes and industrial emissions that can create serious health problems.

The proposals will also limit the growth of factories within the city limits. Other industries, such as cement manufacture, will be removed from Beijing all together.

The state news agency Xinhua said that the city’s coal use will be reduced by 62% by 2020, based on consumption in 2015.

The World Health Organisation (WHO) estimates that 1.3 million deaths a year can be attributed to outdoor air pollution.

China’s latest five-year plan includes a framework to switch the economy away from heavy industry and towards a more knowledge-focused base.

The country has also established seven regional carbon markets and there are suggestions that they could merge into a national carbon trading platform by 2015.