Blog: How two hours in a freezing tent at Occupy LSX gave me hope 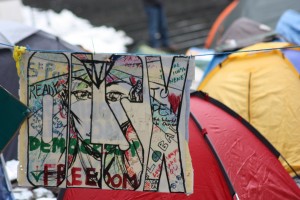 Sat in my coat, scarf, hat, gloves and many many layers, on the coldest day of the winter so far, accompanied by a tent full to the brim with people discussing and debating the problems facing our economy and our environment, it is hard not to feel a little inspired.

Just the fact that this many people turned up to Occupy LSX –  based in the churchyard of London’s iconic St Paul’s Cathedral – on a freezing February Sunday afternoon (5 Feb) to listen to the likes of writer George Monbiot, Green Party Member Shahrar Ali, Asad Rehman from Friends of the Earth discuss the climate crisis, fills you with a little hope for the future.

Kept warm with only body heat – not too tough a task with so many people – the two hour discussion covered a range of environmental topics from global negotiations to Transition Towns, from energy efficiency and shrinking consumption to geoengineering.

In the wake of Durban – where there was a vast divide between what was politically possible and what the science calls for – it is easy to feel a little disheartened. As Friends of the Earth’s Asad Rehen said, sometimes it feels as if the only thing not discussed at the climate conferences is the climate – with so much focus on the economical and political barriers in the way.

He says it is once these people are millions and not thousands, and once the power resides outside the COP and not within it, that change can really take place.

“In 2011 we saw the reality of climate change – we saw floods and droughts and fires. It was clear for all to see and yet the governments still could not act,” he said.

“Climate Justice is not only about the climate crisis, it is about the economic, social and democracy crisis. A two degree rise will devastate the world. In the words of Archbishop Desmond Tutu, two degrees will incinerate Africa.”

There are already examples out there on the local scale of people re-engaging with their environment. Helena Poole, from research organisation Econexus, used the Transition Town movement as a positive example of what people are trying. 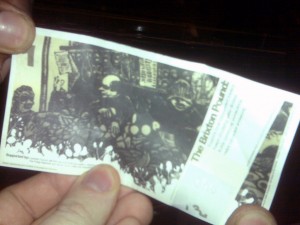 Shahrar Ali also used the movement as an example, pulling out his crumbled Brixton pound note out of his pocket and explaining the wear and tear of it as he off pulls it out to show off.

Ultimately though, climate change is a global problem and the environmental ‘crisis’ and the economical ‘crisis’ seems far bigger than any one group or idea.

The economy vs the environment

While many believe that we must make a choice between our economy and our environment, the strongest message to come out of my weekend at Occupy is that in reality the economy and the environment are two sides of the same coin.

As Suzanne Jeffery, from the Campaign Against Climate Change Trade Union Group explains: “There has been this belief that jobs and sustainability are mutually exclusive and that sustainability is a myth which could not be employed if we wanted jobs.

“But we neither have environmental sustainability or any real development and real opportunity of jobs in peoples’ lives.”

The group’s One Million Climate Jobs Campaign aims highlight this. Sustainability and jobs can inclusive of one another, and green growth could help get people ‘off the dole’ and back to work saving the planet.

But it is not only about moving to a low carbon economy. She believes the scheme could go some way to providing a future for what is now being coined the ‘lost generation’.

This term is used to describe the one million plus 18-25 year olds in the UK – and the countless more worldwide – who are unemployed.

Jeffery argues that we don’t need the likes of Boris Island, an airport in the Thames estuary, fracking and various other job creating industries and projects, but through refocussing our attention of green growth both these individuals and the young as a whole will be given back their future.

However, this growth needs to be weighed against the move to using less – whether this is less fossil fuels or less ‘stuff’, through limiting consumption.

“Climate change says we have to do less of many things and we have to do things a lot quieter than before,” George Monbiot told the audience, battling to make his point over St Paul’s ringing bells.

2010 saw a record rise in emissions, according to research from both the IEA and the US Energy Agency, and latest figures released by the UK’s Department for Energy and Climate Change today.

“Regardless of everything else we do or do not do our biggest task is reducing fossil fuels,” said Monbiot. “And this is one of the only things which is not yet in the political debate.”

So how do we get climate change, as the environmentalists and the scientists see it, into the political debate? And how do we engage with not only governments but with businesses about the economic argument for climate change mitigation?

Economist Nicolas Stern argues that finding solutions to climate change will cost around 1% of globally GDP, while dealing with the consequences of it could cost more than 5% GDP.

Meanwhile with a planet already warmed by 0.8 degrees, and scientists saying the emissions to date will add another 0.8 degrees to temperatures even if emissions stopped today, the IEA’s prediction of five years to prevent dangerous climate change feels more real than ever.

And while there is a long road ahead, and no garuntees that we can do it, I think it is ok to feel a little inspired.