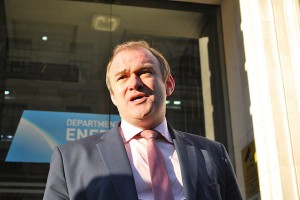 Ed Davey has replaced Chris Huhne as the UK Secretary of State for Energy and Climate Change (Source: Flickr/DECC)

UK greenhouse gas emissions climbed by 3.1% from 2009 to 2010, but remain lower than pre-recession levels.

The latest figures released by the Department of Energy and Climate Change (DECC) today, show that although emission levels rose, they have not offset the dramatic 8.7% decrease from 2008 to 2009.

While most sectors’ emissions remained at a similar level, residential use and energy supply both increased by 15.1% and 2.8% respectively.

“Emissions were up in 2010 because of the exceptionally cold weather and greater use of fossil fuels,” said Ed Davey, Secretary of State for Energy and Climate Change.

“One year won’t knock the UK off meeting its long term emission reduction targets, but it serves to underline the importance of the Coalition’s policies for insulating homes to cut bills and emissions and moving to greener alternative forms of energy.”

The six-month shutdown of the country’s largest nuclear reactor meant additional gas and coal was used to provide electricity in its place.

The sensitivity of residential energy use to the weather emphasises the contribution that home energy efficiency can make, shining the spotlight in the Government’s Green Deal energy efficiency loan scheme set to launch in October 2012.

Despite the latest figures, the UK’s emissions were 30.9% lower than the 1990 totals. The country has a binding commitment through the EU to reduce them by 20% by 2020 and a self-imposed target of 35% for the same period.