As crunch point approaches – both for our economy and our environment – the two issues must be considered together to make lasting, equitable change.

This was the message of Occupy London Stock Exchange this weekend, as Peter Coville from the energy, equity and environment working group met with RTCC in a snowy St Paul’s Churchyard.

The movement has been camped out next to St Pauls for five months, and 100 or so tents strong – including a kitchen, a library and a information tent. The occupiers are joined by both those interested to know more about the protest, and more than a few tourists taking photographs.

The camp – one of many that has sprung up in cities across the world – aims to highlight the ‘corporate greed’ which they say continues despite rising unemployment, privatisation and austerity.

“There is a whole number of converging crises right now in terms of not only the finance system that we have got and our way of doing business but also in terms of environmental crises, climate change being the biggest and most obvious one,” Coville told RTCC.

“There are a whole range of issues which are really coming to a crunch point and I really don’t think we have a choice – the choice really is either being passive victims of this or getting ahead of the game and trying to sort these problems.”

The Occupy movement is now part of the landscape around St Pauls and while many thought the cold winter would see the group leave, they are defying the odds, battling freezing temperatures and icy conditions to continue their protest.

The ramshackle array of tents belies considerable organisation. A series of working groups have been set up to push policy proposals – with the energy, equity and environment group taking centre stage on Sunday. 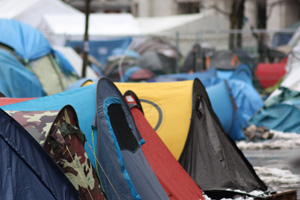 Around 100 or so tents deep, the occupiers say they are in it for the long haul

With only body heat to keep everyone in the canvas-lined lecture-theatre warm, George Monbiot begins his talk by commenting on the novelty of

speaking in his coat and socks. In this University shoes must be taken off as you enter, keeping the rugs spread over the floor clean – but sadly not dry.

No-one complained. With people spilling out of the tent’s flaps,  a few layers were enough to keep everyone at least mildly comfortable for the two hour event.

“Climate Change is being driven by the economy that we have, an economy which is based purely on growth, exploiting nature resources, and people for that matter,” he explained.

“And with a growing world population this is something we have to start looking at straight away.

“We need to have a massive move towards renewables now, we also need to reign back on consumption and looking at the way things are designed for obsolescence and move towards a more sustainable production as well as consumption.”

But with such a massive shift to take place, where does the responsibility lie?

Coville argues it lies with us all. He says it is up to individuals to put pressure on their representatives, but it is up to the institutions to change, and the governments – the lawmakers – to take the lead.

While times are tight, the economic argument against climate action doesn’t stand up at Occupy. As Coville asked, where did the money to bail out the banks come from?

Economist Nicholas Stern has estimated that climate action would costs around 1% of global GDP – that’s £630 billion at the end of 2011. In the US, by March 2009, the Federal Reserve had committed $7.77 trillion to the banks – with similar bailouts taking place in many other countries.

According to the Move Your Money campaign in the UK, taxpayers have given up to $500 billion to the banks in the form of bailouts and guarantee schemes.

Coville, however, says that engaging with government will not be enough, and that for Occupy, the demands will have to go deeper.

“In the short term we have to engage government because the institutions are not going to change rapidly enough to solve the very urgent problems like the climate change issue. 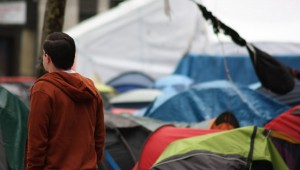 As well as interest from passers-by, the camp has become a stop for tourists and their cameras

“The International Energy Agency has said that we have got five years to solve this problem now to prevent dangerous levels of climate change in a way that is not being done by the UN process so that is something which has got to be done quickly.”

“A little beyond that we need to start looking at systematic change. This is not the ill recipes of the socialist left. This is just a fact that our financial systems are not working anymore and on top of this we are running up against all of these natural limits which are set by the planet which we are going to have to address.”

EU Commissioner for Climate Change Connie Hedegaard echoed these sentiments in an interview with the Guardian today.

Ahead of Rio +20 in June she called for the economic and environmental crisis to be treated as one, and argued our concept of growth needed revisiting.

She said: “We’re trying to make it clear that the climate change crisis is an economic crisis, a social and a job crisis – it should be seen as a whole. If we do not tackle these, we will be in crisis mode for many, many years.

“The 21st century must have a more intelligent growth model, or else it’s really difficult to see how we feed 7 billion people now and 9 billion people [by 2050]”.

The challenge now is for politicians and legislators to translate these sentiments into effective policy.