New research from NASA has provided further evidence that human activity is the cause of climate change.

The study reports that despite low solar activity from 2005-2010, the planet absorbed more heat than it returned to outer space.

It is commonly argued by climate change sceptics that the sun is the primary cause of temperature changes at the earth’s surface.

The sun goes through an eleven year cycle of higher and lower activity with a difference between the two of 0.28 Watts per square metre.

The latest study, led by James Hansen, director of NASA’s Goddard Institute for Space Studies found that the planet absorbed 0.58 W per square metre more that it emitted back into space. 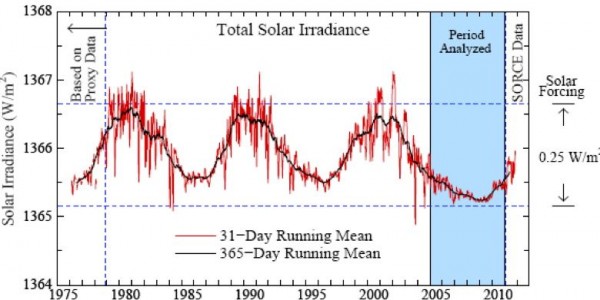 “The fact that we still see a positive imbalance despite the prolonged solar minimum isn’t a surprise given what we’ve learned about the climate system, but it’s worth noting because this provides unequivocal evidence that the sun is not the dominant driver of global warming,” said Hansen.

The team of researchers estimates that in order to reduce this balance back to a state of equilibrium that ebbs and flows with solar activity, atmospheric CO2 levels need to be reduced to 350 parts per million (ppm).

The current estimate for atmospheric CO2 is 392 ppm.

The most recent solar minimum lasted two years longer than usual, but failed to lead to a drop in energy absorption by the planet.

Data used for the study was collected from he Argo network of ocean temperature monitors, satellites and ground monitoring stations

The more shallow sections of the oceans absorbed 71% of the energy, the land just 4% and ice 8%. The rest was absorbed by deep ocean areas and the Southern Oceans.

VIDEO: NASA’s Piers Sellers spoke to RTCC at the UN climate change talks in Durban about the agency’s work in climate modelling