One of the defining moments of the Durban conference was the Indian Minister Jayanthi Natarajan’s passionate speech on equity in the international negotiations.

She argued convincingly that India had been pressured unfairly in the discussions and equated the classic stance of “common but differentiated responsibilities” with a position of equity.

To any observers of the negotiations over the past few years, this aspect of India’s negotiating position comes as no surprise.

Historical emissions and resulting responsibility have been a cornerstone of the Indian negotiating position since the seminal work on this by the Centre for Science and Environment in 1991 making a distinction between “luxury emissions” of western societies and “survival emissions” of the Indian rural population.

Climate justice has two distinct elements: distributional justice, where costs and benefits are distributed evenly across individuals and communities, and procedural justice where those who will be affected by a process or event have an equal role in making the decision.

Discussions on climate justice have tended to focus on distributional justice; the actual distribution of emission reductions and adaptation funding.

However, as can be seen by Natarajan’s speech, the lack of procedural justice within the climate negotiations themselves contributes to a lack of willingness or trust to reach compromises over these distributional issues.

This suggests that the fairness of the process is an issue which will not be going away in future negotiations, and re-addressing this issue could be one way to move on from the current stalemate.

Whilst not downplaying the crucial aspects of international climate justice that need to be addressed before trust can be (re-)developed in the negotiating process, climate justice is a more complex issue than just the relationships between nations.

This is largely a domestic issue. International agreements cannot dictate how mitigation targets should be reached, or how local planning for adaptation should occur. 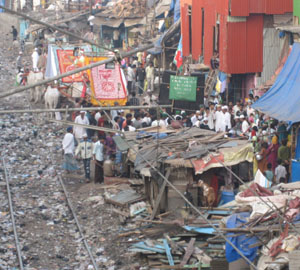 Equity within India is an increasingly important issue as mitigation policies begin to be put in place and the first effects of climate change are felt in vulnerable communities.

Communities living without access to electricity, running water or irrigation facilities are currently contributing to a low emission profile but this is not just, nor can it continue.

Urban poor living in shanty housing, or small farmers using rain-fed agriculture already bear a disproportionate level of the risks generated from climate change, and without some significant changes will continue to do so.

A Greenpeace India report published in 2007 brought issues of national equity to the fore, suggesting that the Indian government was hiding behind the poor in their claims that India emissions were well below the international average.

They argue that India has a massive gulf between the rural poor living below the poverty line and the growing urban elite living western lifestyles which is not reflected in a single per-capita figure.

Beyond this national divide in income, the recently formulated Indian National Action Plan on Climate Change was criticised for the lack of participation from those outside national government.

The government and other actors face the massive challenge of pushing forward with human development with the added burden of climate change. This may involve re-considering existing structural injustices that worsen underlying vulnerabilities.

This is not to criticise the Indian government for an inconsistency in using the international equity argument, but rather to suggest that to deepen an engagement with climate justice, consideration of national and local aspects is also needed. This is not an issue unique to India, many countries face similar challenges.

Local communities living at risk from climate change are those most excluded from the climate debate at any level.

Already living on the edge of poverty, will climate change be a source of extra hardship, or could it act as a catalyst for a more inclusive model of development?

Experience with the Clean Development Mechanism shows this may be a challenge, but bringing diverse communities into discussions of what distributional and procedural climate justice means in the Indian context could be a productive place to start.

Some NGOs have already started work in this direction, holding climate hearings for marginalised communities.

Although it is the international equity argument that makes the news, national and local aspects of climate justice are areas that need to be explored further as we move on from Durban.

Both distributional and procedural justice are key to building trust and relationships internationally, and these principles also need to be applied domestically to develop real climate justice.

Local experiences of climate change effects will be mediated through national policies and existing structural inequalities, and a real engagement with what this means in different national contexts is the first step towards realising justice and equity.

Susannah Fisher is a Post-Doctoral Researcher at the Grantham Research Institute on Climate Change and the Environment at the London School of Economics and Political Science.