Tea crops next in the firing line for climate change 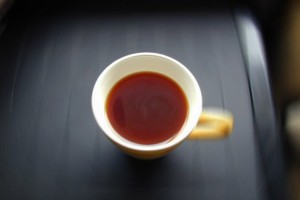 Tea growers are looking for the best solution to protect the future of the much-loved cup of tea (Source: Wiki/Ultratomio)

Tea has become the latest crop threatened by climate change to warrant attention from the UN Food and Agriculture Organisation (FAO).

The latest FAO Conference on Tea, held in Colombo, has begun to draw up plans for the negotiations on how best to protect the crop.

The main producers in India, Sri Lanka, Kenya, China and Turkey are seeking to find agreement on a strategy that accounts for the fragmented nature of the industry.

In Sri Lanka, where Tea accounts for 15% of GDP, more than two-thirds of production is done by small-scale farms, which are harder to pull together and to encourage to invest in climate adaptation strategies

The country’s Plantation Minister Mahinda Samarasinghe told the conference that the country was keen to boost its production. He confirmed that Sri Lanka had started experimenting with new varieties of Tea, better able to withstand drought, disease and pests, but further investment would be required.

“A lot of resources had to be diverted towards sustainable development to protect territorial integrity. However, despite the slight downturn in the globe economic environment the country is maintaining eight percent growth,” Minister Samarasinghe was quoted as saying by a local newspaper.

The Minister also said that importers were imposing new ethical standards on growers and they should “realise that this is a two-way street”.

The climate threat to a number of other cash crops including cocoa and coffee have previously hit the headlines with Starbucks taking action to protect its supply of the latter.