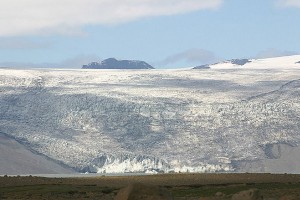 The evidence from the Langjökull glacier in Iceland confirmed findings in Canada (Source: Plassen)

A new international study has pinned the trigger of the Little Ice Age to a series of major volcanic eruptions between 1275-1300 AD.

The increase in surface area of the highly reflective ice sends more of the sun’s energy away from the surface of the planet causing further cooling. This is a so-called “positive feedback loop”.

A negative feedback loop involves a change being offset by its consequences. For example, increased temperatures create more evaporation from the oceans. This means more cloud in the lower atmosphere, deflecting energy away and lowering temperatures.

“This is the first time anyone has clearly identified the specific onset of the cold times marking the start of the Little Ice Age,” said lead author Gifford Miller, University of Colorado Boulder.

“We also have provided an understandable climate feedback system that explains how this cold period could be sustained for a long period of time. If the climate system is hit again and again by cold conditions over a relatively short period – in this case, from volcanic eruptions – there appears to be a cumulative cooling effect.”

The research led by the University of Colorado Boulder looked at two sets of data. The first was radiocarbon-dated plant remains from Baffin Island in arctic Canada. These showed a cluster of “kill dates” around the end of the 13th century.

A sediment core from a lake linked to the Langjökull ice cap in Iceland showed that more sediment was deposited at around the same time.

The extra deposits are linked to the increase in erosion as the ice cap expanded in cooler conditions.

The dates of these thicker layers matched the dates from the plant remains in Canada.

“That showed us the signal we got from Baffin Island was not just a local signal, it was a North Atlantic signal,” said Miller. “This gave us a great deal more confidence that there was a major perturbation to the Northern Hemisphere climate near the end of the 13th century.”

The presence of the Little Ice Age has long been attributed to volcanic activity but dating initial trigger has proved difficult.

Paintings from the period show people ice skating on the River Thames in London, which was ice free before and after the Little Ice Age.

The Little Ice Shows that dramatic changes to the composition of the earth’s atmosphere can trigger complex chain reactions and severe alterations to the climate.