Drought, rising food prices and extreme poverty have all been attributed as factors that led to the Arab Spring.

While not rated at extreme risk from climate change, the Middle East and North Africa region does suffer from severe water shortages, which could lead to conflict in the future.

Some academics attribute the collapse of the Egyptian Empire over 4,000 years ago to drought, causing ‘great riots and anarchy’.

Limited adaptation planning and the lack of environmental awareness within countries’ economic models has further damaged the area’s ability to deal with prolonged weather events.

Between 2000-2011 Syria experienced four severe droughts, which the UN estimate left 2-3 million people in extreme poverty, and wiped out 80-85% of herders livestock.

Poor rains could lead to two of Syria’s arterial rivers, the Jordan and Euphrates to lose more than half of their annual flow – potentially exacerbating an already febrile political atmosphere.

Last week UNICEF warned that half a million children could die ‘or suffer physical and mental damage’ unless the deadly trio of drought, conflict and poverty could be alleviated.

And access to water is also one of the key negotiating positions between Israel and the Palestinian Authority, with research suggesting the area is set to become drier as a result of a changing climate.

RTCC asked Dr Charlie Beldon, Principal Environmental Analyst at Maplecroft – who produced the  Climate Change Vulnerability Index map below – for her reading of the situation in the Middle East and North Africa region. 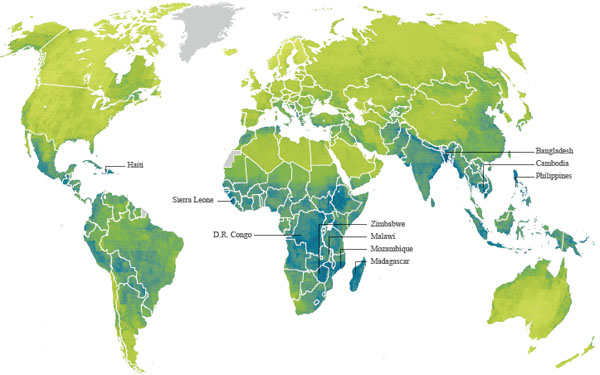 RTCC: The MENA region has many problems to contend with at the moment – where does climate change rate?

CB: Climate change and related issues have the potential to be a significant risk factor in the MENA region.

Although there continues to be debate over the precise effect that climate change will have on the MENA region, it is certain that the importance of water stress issues and sustainable water use in the region will increase.

For example, Egypt will face increasing pressure on their water supply, as weather patterns and the flow of rivers such as the Nile become unpredictable.

Although drought is one of the most significant risks in the region, severe storms resulting in flooding are also a risk and events such as the flooding in Jeddah, Saudi Arabia in 2009, could become more frequent.

These risks will be compounded by the rapid population growth and rising urbanisation predicted across the MENA region.

RTCC: What impact is climate change expected to have in the region?

CB: Despite the generally low vulnerability across the MENA region revealed by Maplecroft’s Climate Change Vulnerability Index (when compared to other countries), some of the most significant risks likely to be influenced by climate change are drought risk, particularly in the Mashriq region, flood risk in parts of Iran and severe storm risk in South West Yemen and the coast of Saudi Arabia.

However, the effects of water stress in the region is one of the most pressing issues as the MENA region is already one of the poorest in terms of available water in the world.

Current supply will be placed under even more pressure both by the growing population and the effects of climate change.

This will have an important knock-on effect on crop yields, which are predicted to decrease, which will push up local food prices and force further reliance on imported crops.

This then leaves the region more vulnerable to price shocks in the international market.

RTCC: Is there enough capacity in the region to adapt to these changes…?

CB: Despite the vulnerability to climate change found in some parts of the MENA region, many of the countries have some capacity to adapt to the changing climate.

In Maplecroft’s Adaptive Capacity Index, which assesses governmental and institutional ability to adapt to climate change, Saudi Arabia, Oman, Iran and Kuwait are all categorised as medium risk.

In contrast, the index reveals that adaptive capacity is lower in Iraq, Egypt, Syria, Iraq, Libya, Algeria and Yemen.

RTCC: Which countries could be at particular risk, and why?

CB: Areas of high sensitivity, which will make adapting to climate change more challenging, are along the Nile where populations are high, in Iraq and the South West corner of Yemen.

The level of poverty, access to sanitation facilities and access to health care services will all make the populations living in these areas more sensitive and adaptation more challenging.

RTCC: To what extent is CC perceived to be a threat multiplier in the MENA region?

CB: The effects that climate change will have on the region are likely to act as a key threat multiplier for a variety of inter-related risks. For example, the lack of water for crop irrigation will impact food prices and in the long term could affect energy production.

However, climate change is just one potential threat multiplier and the effects of population growth and land use change may also have a significant impact on the risk landscape. In turn these can contribute to the risks of violent confrontations in the region.

As well as the impacts of increasing food prices, the need to irrigate crops may lead to the diversion of rivers placing increasing pressure on downstream populations.

However, joint management of water resources may help to ensure that all stakeholders are considered in mitigation plans.

Itshack Moshe from Responding to Climate Change on Vimeo.