They cover 70% of the Earth’s surface and are home to around 99% of the World’s species, but to a large extent the oceans remain a mystery.

While scientists uncover more and more about the delicate ecosystems that live in the sea, they are also developing an understanding of the impacts humans are having on them.

To mark Oceans’ Week, we have compiled an RTCC Oceans’ Q&A.

What is Ocean Acidification?

Ocean Acidification is the term used to describe the ongoing decrease in ocean pH caused by human CO2 emissions, such as the burning of fossil fuels.

While some scientists refer to this are the rising acidity of the oceans, others prefer to use the phase lowering alkalinity.

Ocean Acidification is caused directly by carbon being absorbed into the oceans – the CO2 dissolves to form carbonic acid – and is not related to rising temperatures.

What does it do?

The pH of the ocean has already decreased by about 30% since the industrial reveloution and if we continue to emit CO2 at the same rate, scientists predict that ocean acidity will increase by 150% by 2100.

Scientists are concerned about the effects this will have on marine creatures and ecosystems.

The carbonic acid formed in the ocean from dissolving carbon dioxide increases the hydrogen ion concentration in the water and limits organisms’ access to carbonate ions which they need to form their shells and skeletons.

Most affected by this process are those sea creatures which make shells and coral reefs whose skeletons are made from a similar shell-like material.

What about warming waters?

As well as absorbing carbon from the atmosphere, oceans also absorb heat. Without this service, the rising temperatures witnessed since the industrial revolution would have happened at a much faster pace.

In fact oceans absorb around 90% of the heat from the atmosphere.

When heat is absorbed into the oceans, the surface water of the oceans also warms. The top few metres of the ocean stores as much heat as the Earth’s entire atmosphere.

What will this mean?

As the water heats, it can have adverse effects of many of the fish and plant life in the oceans. Coral bleaching is one of the most common effects of increased ocean temperatures.

The algae which give coral reefs their vibrant colours disappear as they are no longer able to capture energy through photosynthesis.

This has a knock-on effect, as the algae is also a vital food source for many fish.

Some fish species are also at risk from rising temperatures. Scientists are concerned about Krill, which like to breed in particularly cold water near sea ice.

This is a particular concern because while small, these creatures make up a substantial part of the marine food web.

Finally, warmer seas will be less capable of absorbing CO2, a vital service for the planet. As the surface waters warms, they also become lighter and become less efficient at absorbing the extra carbon in the atmosphere.

What does this mean for melting ice?

With warming oceans and a warming atmosphere, one of the biggest concerns over the oceans, is the decreasing of ice.

It is important to make the distinction between the melting sea ice – that which sits on top of the sea – and ice sheets (or polar glaciers) which sit on the landmass at the poles.

Sea ice melts and freezes throughout the year, and therefore does not add to sea level rises. Melting ice sheets  on land would cause a change in sea level.

What happens when sea ice melts? 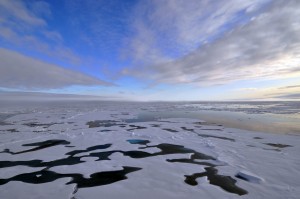 Melting sea ice cause oceans to be darker in colour allowing them to absorb more heat from the sun(source: US Geological Society)

While not contributing to sea level rise, melting sea ice can still affect the oceans.

The melting ice changes the colour of the oceans.

Rapidly declining sea ice would causes darker oceans, and these darker oceans would absorb more heat directly from the sun.

Some scientists predict that rising temperatures could cause all sea ice in the Artic to melt during the summer months, which would in turn mean more heat would be absorbed in these oceans and the rate of warming could further accelerate.

And what about glacier melt?

As well as sea ice melt there are signs that both in the Artic and the Antarctic, glaciers are beginning to recede. It is this melt which will threaten sea-level rise.

What happens if sea levels rise?

Small Island States are those most threatened by the rising seas, but all coastlines could potentially be at risk. In the Intergovernmental Panel of Climate Change’s 4th Assessment Report in 2007, they predicted a rise of 18cm to 59cm by 2100.

However, research since has put those figures at between 50cm and one metre sea level rise in the same period.

For countries such as the Maldives in the Pacific Ocean – where 80% of the islands sit below 1 metre above sea level, and the highest point is just 2.4 m above sea level, these predictions could be devastating.

Fourteen of the region’s 1200 islands have already been abandoned due to sea level rise. As well as other island communities, much of Western Africa is also at threat from coastal erosion and sea level rises.

What about the ocean’s circulation?

Ocean currents cause the nutrient-rich cold bottom-waters to ascend to the surface and move vast amounts of heat across the globe.

As climate change influences environmental factors including wind, precipitation, temperature and salinity patterns, these changes could cause changes in ocean circulation.

The Antarctic Circumpolar Current – the only circumpolar current in the world – is one of the strongest, deepest and most penetrating currents. Monitoring of the current shows it has migrated southwards as the intensity of the Southern Hemisphere Westerly Wind regime has increase.

Scientists believe this movement will also mean the increase in heat content of the waters and a freshening of the upper waters.

Currents have a major effect on regional climate. For example in the UK, winters are mild compared to other countries on the same latitude as it. This is caused by the Gulf Stream current. If this current were to change for any reason, the climate in the UK could be much colder.

While we have already looked at the impact of warming oceans and ocean acidification on fish, on of the biggest threats to sea species is the unsustainable fishing industry.

In 2006 scientists warned that continuing business as usual could cause seafood to disappear as early as 2048. According to the study 29 of the species humans rely on for food have already collapsed.

However, another study in 2009 found that some fish in the US, Iceland and Australia were recovering following conservation methods. 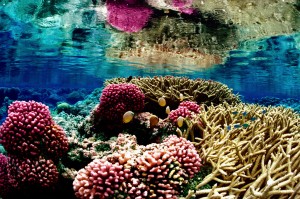 While issues such as ocean acidification and warming waters are locked into the wider issues to higher levels of CO2 and warming temperatures in the atmosphere, conservationists point towards marine protection areas as a way to relive the pressures on marine life.

While Marine Conservation areas will directly protect fish and other sea creatures from the threat of water pollution and over-fishing, they could also have wider benefits for the ocean, because they promote and enhance the ocean’s resilience and capability to recover.

In 2010, 250 marine scientists called for the establishment of a worldwide system of large protected marine reserves to improve “stewardship of the global oceanic environment.”